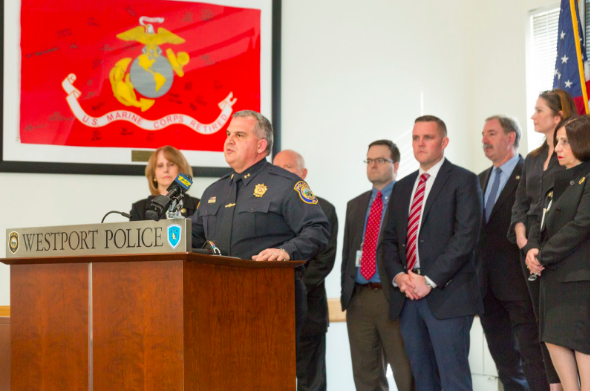 A student report of an alleged shooting threat prompted a shelter-in-place procedure at Staples High School and investigations around Westport on Tuesday, Feb. 27.

“A juvenile student was overheard making threats that he was going to shoot a teacher,” Westport Police Chief Foti Koskinas said during a press conference yesterday. According to Koskinas, the school administrators also confirmed that the student in question allegedly had thoughts of executing a mass shooting at Staples High School.

“The student who overheard this statement reported it immediately to school officials,” Koskinas said.

Currently, two warrants are being executed and investigations are being conducted.  The minor who threatened the school is in custody and has been evaluated at a medical facility.

A joint investigation led by the Westport Police Department and multiple other agencies confirmed that the student’s father owned firearms locked in a safe found in the student’s house.  Officers are still in the process of confirming that all firearms have been located, but that process has been further complicated because of an out of state address that is also linked to the registration of more firearms.

Many Staples students have been experiencing bouts of stress as a result of the events.

“Once I heard the true story of what happened, I haven’t been able to stop thinking about it,” Sanna ten Cate ’18 said. “I am playing a game of ‘what if’s’ with myself. I am so beyond thankful for whoever reported it and cannot imagine what would have happened if they did not hear [the alleged threat].”

Grace Roseme ’19 stated that she was satisfied with the school administration’s handling of the situation. “Although the circumstances were uncertain,” Roseme said, “I think the fact that we’re taking the precautions no matter what shows that they’re really trying to implement all of the safety precautions as much as possible.”

School and district administrators applauded the swift and orderly actions taken by Staples students and staff.  “I would like to commend all of our teachers and our students today because the shelter-in-place went on perfectly as it should have,” Superintendent Colleen Palmer said. “We were able to dismiss without issue.”

Get articles sent to your inbox by joining our free newsletter!