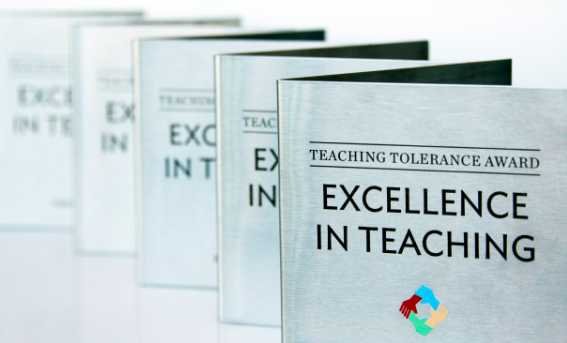 Contemporary World Studies, U.S. History and Women in History teacher, Cathy Schager, was nominated on Feb. 13 as a top finalist for the Teaching Tolerance Award for Excellence in Teaching. Teaching Tolerance, a program started by a nonprofit organization called the Southern Poverty Law Center, listed 10 finalists across the United States whose unwavering commitment to education deserves to be recognized throughout the world.

The top five finalists will be formally announced in July of 2018 in Montgomery, Alabama as the official awardees. There, they will be honored with a cash prize at the Awardee Summit, as well as the opportunity to be featured in a film by Teaching Tolerance that will serve as a model for educators across the country.

Schager is incredibly honored to be nominated as a finalist. “I’m totally flabbergasted,” she said. “I think that the fact that the Teaching Tolerance people are interested in what I’m doing means that I am trying to help people learn about each other and be more tolerant, empathetic and understanding in working towards justice.”

The Teaching Tolerance Program took note of the dedication Schager devotes to her students. “Schager also works to make her school and community more inclusive and equitable by organizing and facilitating community panel discussions and by taking her students to participate in meaningful events,” the nomination reads.

Schager believes that exposing her students to opportunities outside of the school is essential to their overall learning experience. “I want as much as we learn in class to be transferable to outside of the classroom,” she said. “Places like the state capitol are where decisions get made about things that impact you and all of us. It’s important to know what that place looks like so it isn’t an unknown.”

Many of Schager’s students share a similar appreciation for her teaching efforts. Emma Strauss ’20, a student in her U.S. History class, recognizes her passion and engaging teaching style. “I’ve never had a class that I love as much as hers,” Strauss said. “Everyday she discusses issues that we, as students, care about and turns lessons into more of a conversation so that we are always engaged in what we are learning.”

Schager is grateful to be able to do what she loves each day. “I get to talk about things that interest me naturally all the time and help students become strong writers, strong speakers and more knowledgeable,” she said. According to Schager, if she plays even the smallest role in the informed decisions her students make in bettering the community, then every bit of what she does each day is worth it.

Get articles sent to your inbox by joining our free newsletter!