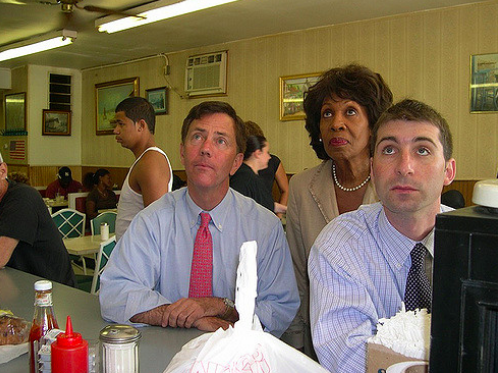 Early Wednesday morning Ned Lamont announced his candidacy in an email and social media posts. Lamont is going for his second running at becoming the governor of Connecticut, being previously defeated by Malloy in 2010.

Malloy has announced that he will not be running for the re-election.

Lamont hopes to implement positive reforms within Connecticut that benefit the people. In his campaign video he pledges to support a $15 minimum wage, decent health care for everyone and job training.

Staples student Isabel Honda ’19 believes that Lamont would be a great governor. “As someone who is pretty middle of the road, ideology-wise, I really like his ideas on reforming the incarnation system and ending the war on drugs,” Honda continues to say, “He also really cares about the environment and he’s making several strong steps forward.”

In an interview Lamont said that Connecticut was hungry for a candidate willing to make “fundamental change.”

“I’ve always broken a little china. I kind of enjoy breaking china,” Lamont said, “I did it in my business. I did it in the Joe Lieberman campaign. And I was ready to do it in 2010. People weren’t ready to break china then. I think they are now.”

But not everyone is a fan of Lamont. Teddy O’Kane ’20 believes that there are other candidates better suited for the position. “Lamont has lost twice in the past and I’m just not sure if he is the right person for the role. While I do agree with some of his points of view, I don’t feel that he would be able to execute on them.”

Lamont, 64, is the founder of a cable television company, Lamont Digital Systems, which provides cable services to college campuses. In previous runnings Lamont has used millions of dollars of his own personal money during his campaign and will look to do the same for this one as well.

Sean McLean, professor of political science at Quinnipiac University, believes that Lamont is making a good choice by entering into the race. “I think Lamont’s smart to look at the field and jump in because he’s the one with the most name recognition in there now, he doesn’t have any record of ethical lapses, he’s never been to jail and he’s got the funding to really finance a campaign to win a primary if he has to.”

In Lamont’s news release he says that Connecticut has to change the way we do business. “More good-paying jobs, more companies moving into Connecticut that attract talent, more leaders willing to come together to find common ground, fix our budget, and get our state moving again,” Lamont said.“We have serious issues to address and our leaders will need to tell the truth about how we are going to solve our biggest problems.”

In an interview with Hearst Connecticut Media, he said, “This is going to be a new start for the state of Connecticut. Everybody knows I’m my own man. I’m a different type of Democrat. I’m not afraid to take on the status quo, even in my own party.”