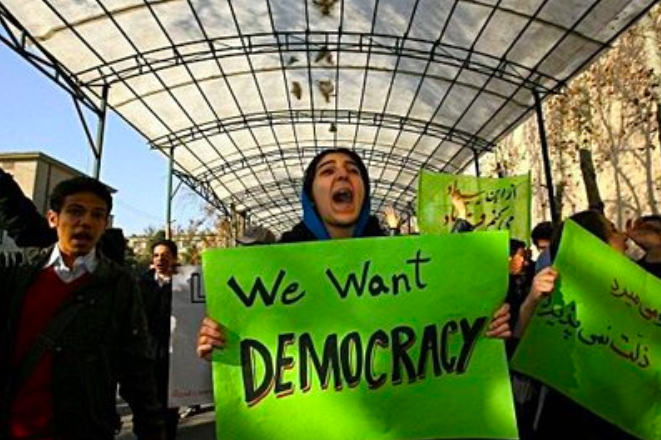 Demonstrations began December 28th in Mashhad and continued to spread through December 31st to various cities including the nation’s capital, Tehran. There are countless videos showing footage of peaceful protestors expressing their resentment of Hassan Rouhani’s presidency. In addition to their anger towards Rouhani, protesters have also been directing their anger toward the supreme leader, Ayatollah Khamenei.

Protests in Iran are very uncommon since the last major protest was in 2009 in support of the Green Movement which was the political awakening in which people wanted Mahmoud Ahmadinejad removed from office. Surprisingly, while the Green Movement had support from most Iranians, it lacked the backing of the more impoverished Iranians.

On the other hand, the current anti-government protests have the full support of everyone in Iran. While the rallying cries behind the protests are diverse as some people are chanting over Iran’s incompetent foreign policies and others are complaining about the economic difficulties, I feel that the root of these protests is economic difficulties.

The protests show that the Iranians are exhausted by the economic hardships they are facing due to multiple reasons. They had a sense of hope in 2015 when the US and Iran reached the Iran Nuclear deal, which was supposed to help the Iranian economy greatly. Unfortunately, this did not materialize as the economy did not do nearly as well as anticipated.

This was for various reasons, one being that though sanctions were lifted on Tehran’s nuclear program, other sanctions on non-nuclear activities remained imposed. This was also one of the reasons as to why Hassan Rouhani was elected by a landslide vote in 2015. His campaign was based on the positives of the nuclear deal and that he would sort out the remaining sanctions. In addition, he promised that he would bring social reform to Iran. As evident, he has not delivered on any of these campaign promises, and as a result, ordinary citizens are frustrated.

The common Iranian is further angered by the criminal mismanagement of the country’s vast energy resources due to pandemic corruption. I feel that this is a result of Rouhani facing pushback and roadblocks in implementing the economic transparency that was part of his promised government policies. In addition to internal pressures, he has also been unable to lift the external sanctions on the country which further contribute to economic hardship for the common man.

Basically, all of these things are hindering the Iranian economy from thriving, thus there have been countless peaceful demonstrations in the last couple days.

On Friday, Trump tweeted the following: “Many reports of peaceful protests by Iranian citizens fed up with regime’s corruption & its squandering of the nation’s wealth to fund terrorism abroad. Iranian govt should respect their people’s rights, including right to express themselves. The world is watching! #Iran Protests”

While I agree with the President’s statement on the right of Iranians to protest, I feel that the US should not insert itself too explicitly into this delicate situation. The US risks being called out for keeping silent on another human rights violation situation as a key ally, Saudi Arabia, is active in the destruction of Yemen, and committing a genocide through starvation.

The hardliners in Iran would exploit this “double standard” and deflect their internal pressure by blaming the US for their current internal protests. In my opinion, the US should partner with other democracies to provide moral support to the protesters so that the internal pressure on the regime continues to build. It is important to remember that the Iranians are a proud and independent people and should be trusted to hold their own leaders accountable.