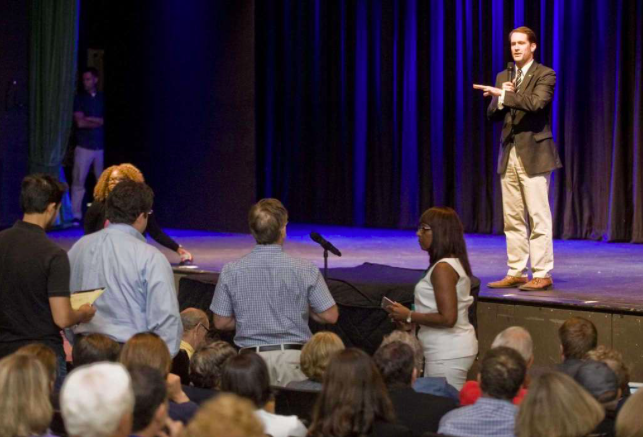 Congressman Jim Himes of Connecticut’s 4th District visited Westport Town Hall on Wednesday, Jan. 3, where he answered questions regarding current political activity and plans for the future regarding his representation of Connecticut.

Despite the evening’s impending snowstorm, Himes spoke to a standing room only crowd and to local officials including Westport First Selectman Jim Marpe. Within the two-hour meeting, a wide variety of topics and controversies were addressed from the immigration to gun control.

Himes expressed disappointment in the Trump administration’s decision to start off 2017 with the attempted repealing of the Affordable Care Act, which narrowly avoided repeal by Congress last year.

“That is politically toxic stuff,” said Himes on the issue, “and that set the tone for the rest of the year.”

However, the Congressman also emphasized the importance of keeping an open mind when it comes to listening and compromising with the President and his administration, and assured his audience that he would continue to lead with this example.

The Mueller investigation was another discussion topic connected to the Trump administration, and which seemed to be an area of particular concern for Westport residents when it came to the potential firing of FBI Special Counsel Robert Mueller. The investigation led by Mueller into Russian interference in the 2016 U.S. Presidential Election has been a major topic of discussion in the press and in the White House. The investigation, which could incriminate President Trump and his administration based on collusion with Russia, has received much criticism from the President himself, with reports of talk in the White House about firing Mueller.

Yet Himes seemed to maintain an optimistic viewpoint on the situation, citing the probable pressures currently on President Trump by his administration and his advisors not to fire Mueller. He also added that if Trump were to fire Mueller, the Obstruction of Justice case against Trump would become more obvious. With this logic, Himes reasoned that the possibility of Trump deciding to fire Mueller is unlikely.

Nevertheless, the Congressman addressed concern over Trump’s threatening to fire Mueller and the President’s other “verbal attacks”. When asked about these verbal attacks, Himes noted the issue as “not so much of a free speech issue but a remarkable violation of norms” by the President. He added that, although Congress can’t moderate the President’s statements, they can moderate his legislation.

Gun control was also touched upon by Himes, who noted that the House was “making progress” on this front. When asked about reaching across the aisle on this matter, the Congressman emphasized that the conservative side of the debate is changing, noting that their dialogue is getting “a little more sane.”

Although optimistic about a progressive solution coming out of the gun control argument, Himes described the argument itself as a slow, “unsexy” process, and expressed sorrow over the mass shootings that will occur in the meantime. “What’s heartbreaking is the number of people who are going to die while we have this argument,” said Himes.

The Congressman received a standing ovation at the conclusion of the meeting, and Himes expressed gratitude to his audience over their action to get involved politically. In the middle of the meeting, after the audience applauded in response to a question about the U.S. Census Bureau, Himes commented that he probably has “one of the only districts that would respond with a round of applause to a Census Bureau question.”