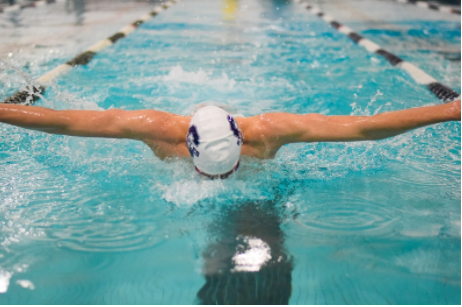 Most five or six-year-old’s struggle to put on their sweaty shin-guards before a soccer game, or put all of their effort into loosening up their new baseball glove. Nico Ortega ’18, however, was up to something different. Living in Caracas, Venezuela, he was introduced in kindergarten to what would become his lifelong passion: swimming.
“The school I went to was a private music school, so they always thought swimming was the best sport because you can’t really hurt yourself doing it,” Ortega said. “With other ball sports you can hurt your hands, but that’s not really the case with swimming.”
Ortega, who also is very passionate about the violin and viola, has found many successes on the Staples swim team, recently winning the 500 freestyle at FCIACs with a time of 4:39.03 and taking second in the 500 freestyle at states. Apart from Staples, Ortega swims for the Westport Water Rats and has traveled across the country competing in tournaments. He broke a Water Rat record, which was previously held for 17 years, by finishing the 1,650 freestyle in 15:37.18 during the Speedo Music City Invitational in Nashville, Tennessee.
Ortega is offered support from the Staples swim coach Frisk Driscoll. Driscoll raced the 500 when he was a student, and he feels that with the experience he possesses, he can greatly benefit swimmers like Ortega.
“He’s really embraced it with open arms,” Driscoll said. “He’s got a great work ethic and he’s one of those kids where he gets to a big championship meet and the rest of the state goes, ‘Wow, where’d this kid come from?’”
Charlie Nadel ’18 has nothing but high praise for the friend and teammate he has had since third grade. According to Nadel, Ortega has always significantly stood out as a swimmer, more specifically starting freshman year, when his wingspan expanded almost six inches.
“He always seems to show up to practice ready to work hard, even though we have a lot of fun with him as well,” Nadel said. “It is always good to see teammates around you succeed like he does and he does bring an exciting attitude to the team as a whole.”
Ortega looks to continue his efforts not only throughout the closing of the season, but possibly even at the collegiate level.
“It has kind of made me want to get better and see where my ceiling is,” Ortega said. “There are a lot of other fast swimmers in this country. Seeing that I’m not really that fast compared to them, I want to get to an even higher level.”