We must discuss matters of Ukraine,Russian conflict with students 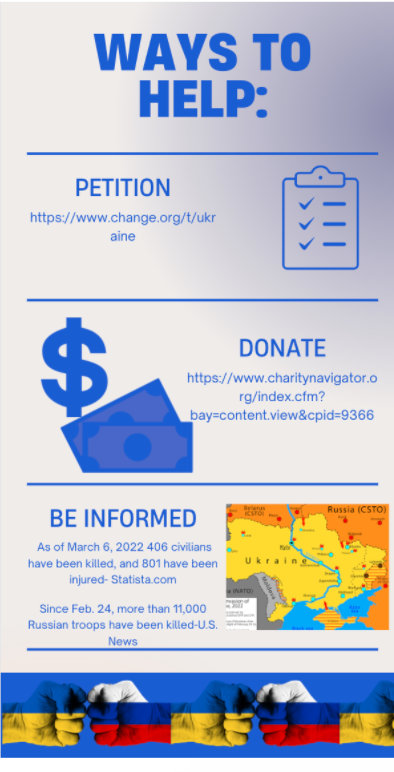 Helpful resources to support the Ukraine and Russian conflict include charities, petitions, videos and articles.

The topic of the Russia-Ukraine War is one that holds great importance. Not only is it immediately affecting both of these countries to an unfathomable extent, but it also impacts every individual around the globe in one way or another. Whether it is economically, by housing fleeing citizens, petitioning or donating towards organizations, everyone has been impacted by this conflict. Therefore it is incredibly important that this topic is discussed in school to increase awareness while also preventing the spread of misinformation.

For example, the price of gas has increased because the sanctions that the U.S. has inflicted on Russia has impacted our ability to access oil, being that Russia is a major crude oil supplier. According to the New York Times, gasoline prices nationally average about $3.61 dollars which is a dollar higher than last year.

While every student is required to take a history course, most students don’t have a class which discusses the current events going on in the world unless they are taking Current Issues which is only available to upperclassmen. With the evolving conflict between Ukraine and Russia, the school has an opportunity to spread awareness to students about this and fulfill their duty as educators. If students complete all four years of high school without learning about important current issues, have they really even learned?

Additionally, this war could escalate and further  involve the U.S., to which it would be even more important to be educated on the conflict. President Joe Biden has stated that the U.S. is prepared to defend NATO and its allies under any circumstance.

“There is no doubt — no doubt that the United States and every NATO Ally will meet our Article 5 commitments, which says that an attack on one is an attack on all,” President Joe Biden said in an interview documented by the White House.

Oftentimes the school avoids discussing taboo topics that could possibly lead to disagreements, yet it is in those conversations that students understand new perspectives on situations. While it is important to maintain a civilized class environment, it is also vital to discuss relevant events that have major impacts on the world.

Within the rapid development of technology, our generation has relied on social media to provide us with information about news. While this may seem like an efficient way to stay informed, the lack of fact checking and distinguishing bias that is present within social media can very quickly lead to misinformation amongst our generation. With a topic so serious like the Ukraine and Russian conflict, the rumors of incorrect information can be unnerving. To prevent the spread of inaccurate information, the school should discuss the matters of the conflict in an unbiased yet factual way. Areas such as Los Angeles found this to be very helpful in settling students’ nerves that were worked up due to fake news.

“As the news of Russia invading Ukraine dominates news cycles, teachers throughout the country are helping students navigate the wave of emotions that comes with devastating world events,” Melissa Gomez said in a Los Angeles Times article. “They’re providing much needed historical and political context. And they are doubling down on media literacy practices amid the flood of misinformation online.”

While discussing this matter may distract from the current units being taught, even just a couple minutes dedicated to providing students with accurate and relevant information about this topic would be incredibly beneficial. Such information could be discussed during students’ required  social studies class which typically already focus on world issues. As suggested by Tyler Bonin in The Atlantic, students can face a lack of context due to growing up in such a technologically advanced society. It has become very easy for students to ignore the chaos going on by simply clicking to the next Instagram post or television channel. With young impressionable students, it can be difficult to differentiate fake news from reality but with the assistance of teachers, these misconceptions could actively be prevented.

All in all, teachers must educate students on the Russian and Ukraine conflict. A fitting time for this could be during their already scheduled social study classes. Doing so will not only increase student awareness, but ensure that they are receiving credible news.