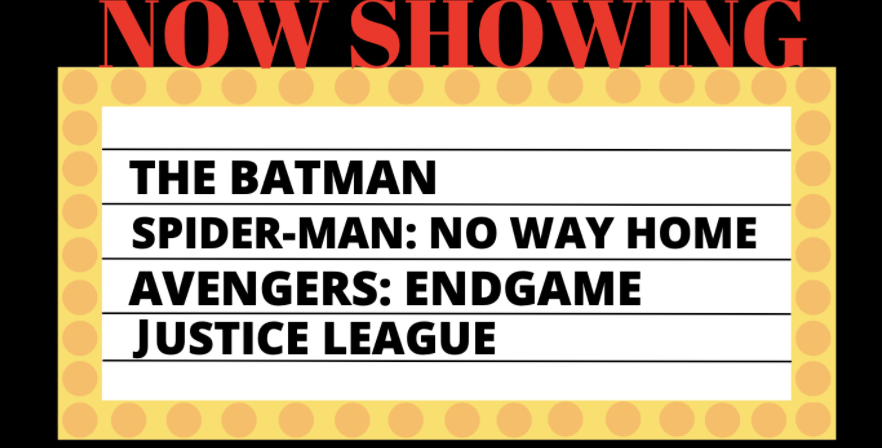 For the last two decades, superhero blockbusters have dominated the film industry to the indignation of acclaimed filmmakers. In the business’s current state of disrepair, the industry has its heroes in those that have graced the silver screen.

After nearly two years of halted film production, delayed releases and the ascent of online streaming, the film industry is holding out for a hero.

In 2020, theatrical entertainment amounted to a mere 15% of total global entertainment revenue, marking a 28% drop from 2019 and a $30.3 billion decrease in theatrical revenue, as per Forbes. Much to the chagrin of certain critics, esteemed filmmakers and actors alike, the assemblage of superheroes that have appeared on the silver screen are the caped crusaders cinema needs in its current floundering state.

As protective measures against the spread of COVID-19 are relaxed, studios are seeking  surefire means to boost their profits and superhero films have proved to be a reliable source.

As entertainment conglomerates Disney and Warner Brothers Pictures unveil their annual slate, a billion dollar superhero blockbuster baby is planned to be delivered every three months. Both studios and theaters were decimated by pandemic forced closures. The big screen experiences superhero movies provide will compel audiences back to the theater in droves and generate discussion on the state of modern cinema. The profitable and controversial nature of these films is precisely what the industry needs to elevate viewership and revenue.

Many filmmakers have expressed disapproval of superhero movies as the genre has dominated the market for nearly two decades, among them renowned directors and screenwriters Martin Scorsese and Francis Ford Coppola.

In an opinion for the New York Times, Scorsese criticized the genre, stating each installment in a franchise is repetitive in nature in their reuse of material and that superhero blockbusters resemble theme parks more so than movies.

Coppola joined in Scorsese’s dismissal after the Lumière Film Festival two years ago, asserting that audiences expect to gain knowledge and inspiration from cinema and in failing to do so superhero movies are not cinema.

Scorsese and Coppola’s criticisms of such films have merit when considering the current state of the film industry: audiences are not viewing films in the way they have in the past. As a consequence of the shift of audience attitudes, studios are favoring foolproof, commercially successful movies over original, arthouse films.

The pandemic all but exacerbated this development. The cross-generational appeal of superhero blockbusters has long generated a large audience, while auteur directors have struggled to find an audience for their work. Although indie films stand to lose the most showing in the shadow of the popular franchises, for a resurgence among these experimental films, studios need to regain their footing through the mass distribution of formidable commercial successes.

Furthermore, the assertion that superhero blockbusters are recycled and devoid of artistic influence is a vacuous, preconceived notion. One only needs to actually sit through a film to note these films are an art form in and of itself, though they may not resemble Wes Anderson’s dollhouse aesthetic.

A lifelong comic lover, director of the original Spider-Man trilogy Sam Raimi mimicked comic panels in his works. In action sequences, Raimi utilized tilted cameras, high-energy whip cuts and a focus upon individual parts of the body rather than the whole to resemble panels showcasing a dynamic moment.

Chloé Zhao, independent filmmaker and the Oscar winning director of Nomadland, took her first steps into the foray of big budget films with Marvel’s “Eternals.” Zhao’s penchant for naturalistic settings left an unmistakable imprint of the film, with long shots of sunrises, desert expanses, and the uninhabited frontier.

Matt Reeves’s “The Batman” diverges from the standard superhero film in its lengthy run, dark themes and grim tone. The recent success of both “Spider-Man: No Way Home” and “The Batman” reveal variety within the genre is in demand, and assert such films are not mere duplicates.

The aforementioned films have arrived when the movie business is fraught with anxiety and have served as a means to incrementally move the industry toward its former state in a manner auteur films currently cannot. To save the industry for arthouse projects and blockbusters alike, guaranteed commercial successes are a necessary “evil.”