Harsher punishment must be enforced for parking in seniors’ spots 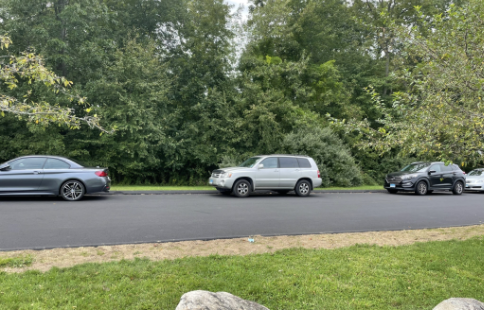 Wakeman field at Bedford Middle School is the designated parking area for juniors. There are not set parking spaces, making parking there not optimal.

One of the biggest highlights of junior year is the freedom that comes with being able to drive to school. Everyday, juniors can grab their keys and head to Starbucks before rolling into the Wakeman parking lot at Bedford just in time for school. Although this would be the end of the story in a perfect world, many juniors have resorted to parking in the spaces that have been bought and occupied by seniors.

When juniors park in the spots of seniors this causes inconveniences for the entire Staples community. For example, when a junior takes a senior’s parking space, that senior ends up taking someone else’s spot, and then a chain reaction of seniors taking other senior spots occurs, not to mention the creation of an  angry mob of seniors posting to the Staples Superfans Facebook group.

According to the Staples Student Handbook, if a junior parks in a senior’s space, they would have to pay a parking violation fine the first time. The second time, they would receive a parking violation fine and a detention. Finally, if someone has the audacity to park in another person’s spot for a third time, they will have their car immobilized and have to pay a $50 fine.

Juniors must be taught a lesson and receive a more severe punishment. Although the punishment starts to get pretty extreme by the third offense, the first two punishments aren’t intense enough to urge juniors away from parking in a space as the price of the fine is basically just the small price of parking in a convenient spot.

If anyone parks in a spot that isn’t their own, they should not be allowed to drive to school anymore. This seems harsh, but even coming from a junior, parking is a privilege and something you have to wait for in order to enjoy it more.

Enforcing a punishment as harsh as the one suggested would create more fear for the repercussions of a junior parking in a senior’s spot. This fear would strongly discourage parking in a space that isn’t their own, creating fewer problems for the seniors.

The junior class of 2023 have to treat the seniors with the same respect they wish to receive next year.