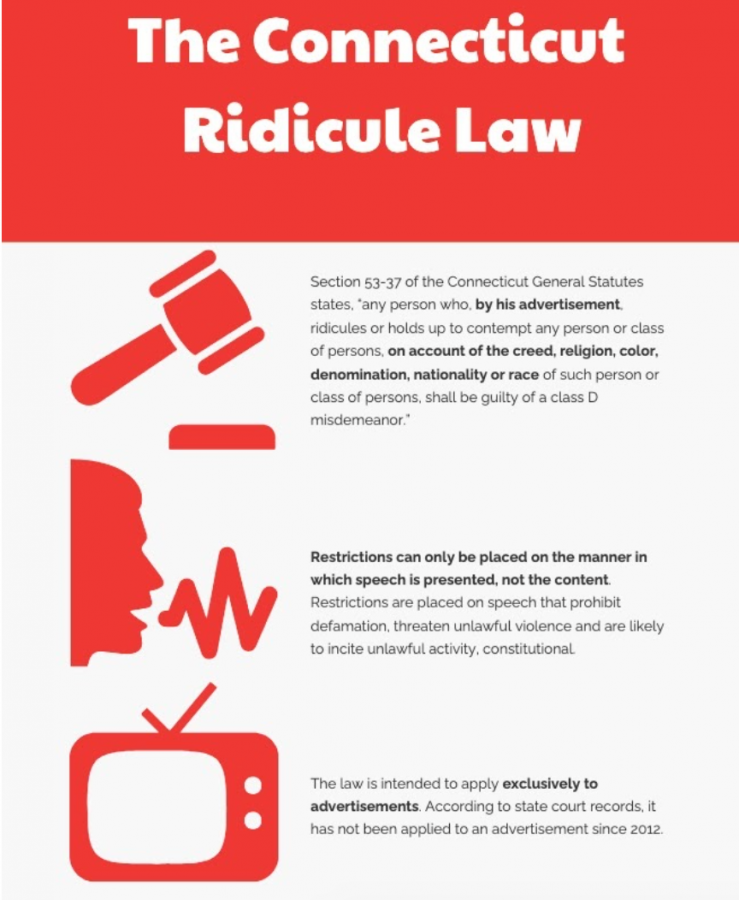 In an effort to break out of America’s systematic oppression of people of color and put an end to racially targeted violence, creating a safe and welcoming environment for Black students is more paramount than ever. But while it is critical to hold students who disseminate racist beliefs accountable, we should re-evaluate the constitutionality of the means by which Connecticut has been doing so.

On May 7, a white student in Fairfield-Warde High School allegedly took and posted a photo of his Black classmate to his Snapchat story along with a racially offensive caption containing the n-word and questioning why the student was not “in chains.”

In response, Fairfield police arrested the student on a state hate crime charge of ridicule under Section 53-37 of the Connecticut General Statutes, which provides that “any person who, by his advertisement, ridicules or holds up to contempt any person or class of persons, on account of the creed, religion, color, denomination, nationality or race of such person or class of persons, shall be guilty of a class D misdemeanor.”

While this Connecticut ridicule law dating back to 1917 has good intentions, it constitutes an unconstitutional infringement on free speech rights under Supreme Court jurisprudence, as articulated by the American Civil Liberties Union. In RAV v City of St. Paul in 1992, the Supreme Court ruled that content-based restrictions on free speech are presumed to be invalid— in other words, the government can only restrict speech based on the manner in which it is presented, not on the viewpoint being espoused.

Restrictions on free speech that have been ruled constitutional are those prohibiting defamation, “true threats” that threaten unlawful violence and “fighting words” likely to incite unlawful activity.

The application of the law, which is unique to Connecticut, is equally misinformed. The wording of the statute is only meant to cover “advertisements,” not to be broadly applicable to speech, and it was initially enacted as “An Act concerning Discrimination at Places of Public Accommodation,” aimed directly and narrowly at business advertisements. And yet according to state court records, in the at least 40 times the law has been filed since 2012, not once has it been applied to an advertisement, according to the Hartford Courant.

A bill to overturn the ridicule law was being considered by the Connecticut General Assembly last March, but the bill had died when the state legislature ended its session early at the onset of the COVID-19 pandemic, and it has not been revisited since. While the ridicule law may not seem to be a priority, its repeal is essential to the preservation of our fundamental liberties.

The cornerstone of our democratic values rests in our vehement protection for the thought we hate and the speech we disagree most with. Failing to distinguish the boundaries between instituting necessary societal consequences for hateful and inflammatory speech and legislating dubious laws that flatly prohibit such speech runs the risk of infringing into those spheres of speech that we have always presumed to be protected. For instance, if a White attendee felt insulted by a Black comedian’s comment that he perceived to be critical of the white race, would the ridicule law also apply? And if racial hate speech is analogized to fighting words when directed at another person and likely to provoke a violent reaction, then what legal shields would prevent political hate speech, which can also be viewed as likely to provoke violence, from being criminalized?

Returning back to the Fairfield-Warde case, free speech in the school setting has traditionally been viewed as more restrictive than speech outside the classroom walls. Our local school systems are granted the necessary discretion to determine consequences and punish students for such impermissible conduct that poses a threat to the safety or well-being of targeted individuals or groups of students. The Fairfield-Warde administration appropriately and adeptly handled the incident by issuing several notices and letters to the student body and parents, and by suspending and ultimately expelling the student who made the post.

Racially motivated “ridicule” in the classroom (an action significantly more damaging than the word suggests) is not and should never have been an issue of state jurisprudence. Even though the attack occurred on Snapchat and was not physically confined to the classroom walls, the schoolhouse gate today is more expansive than ever before. In fact, another Snapchat case in which a cheerleader who did not make the Varsity team shared an offensive post with other students and members of the team has made its way to the Supreme Court and is currently being debated.

With the emergence of the Internet and social media platforms and in a time when online schooling is an option, a sharp distinction between in-school and out-of-school speech is no longer valid. Schools should have the singular authority to regulate and punish any verbal or written assaults committed by students. Further, the best way to thwart acts of racism and white supremacy is not through reverting to unconstitutional criminal legal systems that have a history of ineffectiveness. These goals are best attained through implementing restorative justice models within schools that educate students and foster safe learning environments for victims of racially motivated behaviors.