Silence towards this year’s shootings due to oversaturation of violence, shallow trendy activism 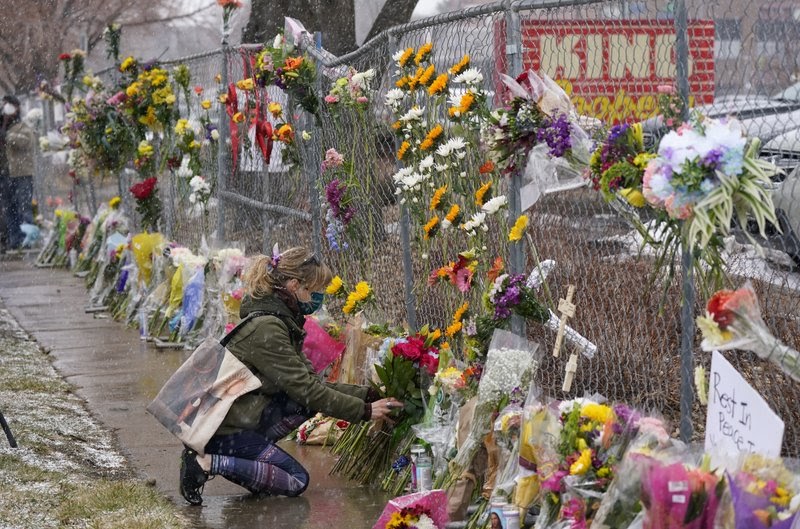 A woman kneels with flowers to pay tribute to the 10 victims of the Boulder, Colorado shooting on March 22.

When Colorado citizens went to King Soopers for their Monday afternoon grocery haul, they were completely unaware of what was about to take place. They did not know a man would enter the store, strapped in an armored vest and gun in hand and threaten  them. While pacing up and down the aisles for a full hour, searching for hidden, store customers and employees, suspect Ahmad Al Aliwi Aissa took the lives of 10 people.

Unfortunately the Colorado shooting is only one of 103 mass shootings since 2021 began. This is especially shocking since there are fewer people out and about because of COVID-19 safety restrictions. Although a call for action is necessary, there hasn’t been a word, at least in Westport or Staples, on any of these shootings.

In 2019, there were 434 mass shootings and a wave of activism followed, ignited especially by the shooting in Parkland, Florida in 2018. Many students participated in a walk outside of Staples in protest of gun violence. Statistics and infographics were reposted on Instagram stories and Facebook feeds. But in the face of these current killings, there’s been disturbing silence.

The most devastating phenomenon in this situation is the expectation that horrible crimes have to pile up to seriously matter. Many only care about statistics. They want to know how often it’s happened. But is once not bad enough? Twice? A 100 times? How many crimes justify a reaction? The humane answer should be one. I plead that people realize this before it takes another 100 shootings.

So, although there have been fewer shootings than in 2019, we still need to take action. We can petition our local legislators to sign the bill supporting universal background checks. We can spread awareness so that whole communities feel determined to demand harsher gun laws.

But it is insanely hard to resolve violence nationwide let alone worldwide.If conflict could be solved with one post, one protest, one donation, or some volunteer help, we would be bathing in world peace by now. It will take nearly everyone’s participation to curtail gun violence.

Petitions must be constantly created and signed, information always circulating and protests always happening. The fight cannot end just because gun violence is not the trending hashtag.