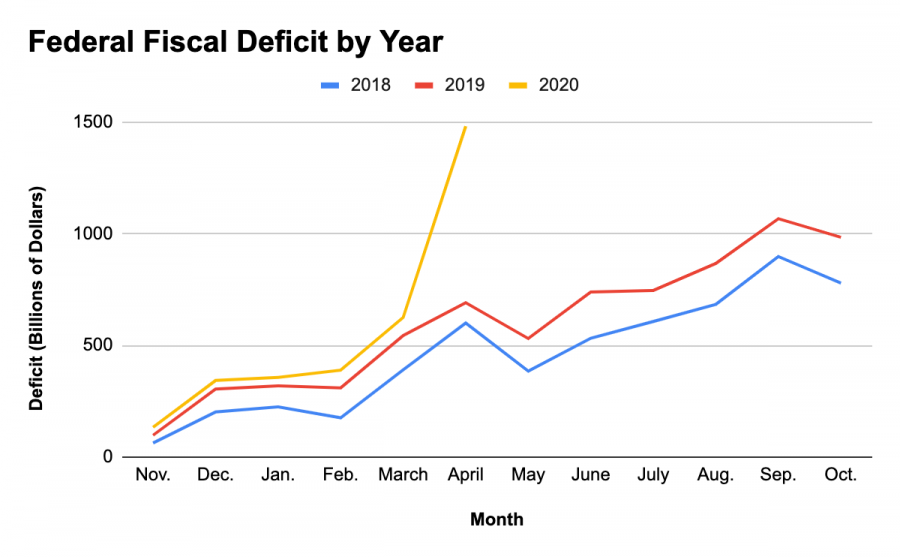 As a result of Congressional spending, the US deficit skyrocketed in the month of April. By this year’s end, the Congressional Budget Office projects that the deficit will be $3.7 trillion.

These are unprecedented times. Never have so many people been isolated from society.

The effects of social distancing impact more than just the social aspect of our lives. The American economy is in dire straits. Congress has responded with massive spending, including a $2 trillion stimulus package, which is the largest spending bill in the history of this country.

Efforts to expand the economy are flawed because they increase our national debt beyond what our economy can sustain.

Our Federal government has a dangerous and rather disheartening tendency to pander to voters instead of do what’s best for the country. Fiscally, this usually means that we spend a lot, and tax very little.

Where do we get the money to pay for the deficit? Most prominently, Congress pays for our shortfalls by selling treasury bonds, which they have to pay back later with interest. And boy, do we pay dearly. The US Spending Data Lab states that interest on our debt eats up $375 billion, good for 8% of our annual budget.

When we can’t muster the funds to pay for that extra expense, how do we deal with the difference? By selling more bonds. Which builds more debt. The cycle is self-exacerbating.

In the entire 2019 fiscal year, the government spent $984 billion more than it took in, according to Brookings. By contrast, in the month of April alone, the deficit was $738 billion.

If we don’t fix the crisis, we’re going to have to raise taxes or print money to make up the difference. High taxes and inflation can seriously harm the economy, decreasing private spending and devaluing our currency, respectively.

When asked about how to cover the bill that Congress is racking up, Speaker of the House Nancy Pelosi distracted by bringing up the Tax Cuts and Jobs Act of 2017.

“Nobody made as big a fuss as [Congressional Democrats] did when [Republicans] passed a nearly $2 trillion tax break for the wealthiest people in our country,” she said.

Both parties are to blame for out of control spending, which means both parties must come together to face and mitigate its consequences. But, as is usual in Washington, both parties are running from the mess they’ve created.

Some politicians who claim to represent us evidently don’t think there should be an end to our government’s spending.

House Democrats proposed yet another stimulus bill to spend an additional $3 trillion according to CNBC. Do our leaders think we should ever stop spending money?

I suppose I’m automatically at a disadvantage when I point out the drawbacks in policies that are intended to help American families avoid bankruptcy. I would not be making these criticisms if the United States had the budgetary stability to bear the burden exerted by multi-trillion dollar spending. Not only that, but the weight of repaying this deficit will fall on those same American families.

Finally, I’ll address what strategies I think should be used to close the deficit. I will defer to the Congressional Budget Office, who provided a list of 121 ways to decrease the budget over the next 10 years.

I’ll point out a couple highlights. A 5% value added tax (which is used by the majority of the developed world) would raise an estimated $2 trillion in revenue. Cutting Department of Defense spending can save hundreds of billions of dollars, and I don’t foresee a world war in the near future.

Almost any action we take to fix the budget will be painful, but our representatives have created a fiscal crisis. It’s their job to fix it.