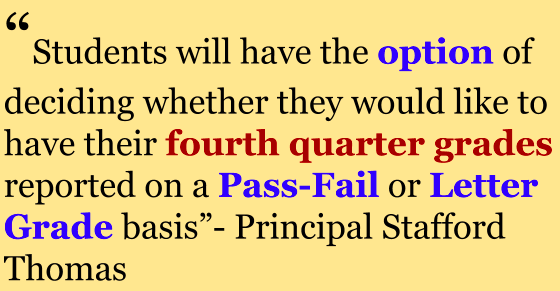 Parents received an email on Apr. 5 regarding the new grading system occurring in the fourth quarter, in which students will decide how they want their grades to be reported.

March 11 was a routine day for Staples students: classes changed at the ring of the bell, teachers assigned work, messages were received about “Seussical,” sports practices and concerts, the song of the day lady blasted a pleasant German tune. However, by 2:15 p.m. that day, school and all corresponding activities were cancelled indefinitely. The hallways flooded with jovial cheers, teachers refrained from saying goodbye; at the time, it seemed to be a second spring break, just a two-week vacation from stressful academics. Little did we know, we would be isolated from most of the outside world until at least May 20.

On April 5, a preliminary email was released to parents stating that students have the option of having their fourth-quarter grades reported on either a pass-fail or letter grade basis, which was presented in regards to the fact that school may be cancelled for the remainder of the year. While the idea of student choice seems like a welcome change, the pass-fail system espouses academic apathy and must be revoked for the good of our education.

The introduction of an alternating-day schedule has created the much-needed structure and quasi-normalcy to distance learning; however, there is still one pervasive problem that hinders the option of pass-fail from being a productive method of education: student motivation.

With the absence of both interpersonal contact with teachers and a school environment that separates relaxation from learning, students don’t feel as pressured to participate in class discussions or complete their assignments on time. This decline in work ethic has been especially noticeable throughout the past few weeks, as some of my teachers have complained about students not showing up to Google Hangouts, skipping the allotted class periods or ignoring work altogether.

Pass-fail will only exacerbate this apathy. By definition, the system would mark any earned grade—from an A+ to a D- —as a “pass,” while anything below a 59.5% would be a “fail.”  This will take away what little motivation students have, as we will only need to stay on top of our work once we obtain simply a good enough grade to avoid failure. Though one quarter of subpar studies may not seem significant now, the setback will inevitably reverberate, as proper high school education is essential for success in the future.

Moreover, the unexpected introduction of the pass-fail system without a clear explanation only increases stress among students already enduring a difficult transition. Students are now wary that they may regret their decision in the midst of the quarter, causing an anxiety-inducing end to the school year. The pass-fail system has not been clarified or finalized yet, so students at this point are unsure as to when they would make this decision, prompting—you guessed it—further stress.

The contrasting options also lead to confusion as to how fourth-quarter grades will be implemented. Staples is a competitive environment that emphasizes academic excellence; in the midst of uncertainty, many students are concerned as to how the various grading systems will affect our GPAs, which should be the least of our worries at a time like this.

A simple solution to the issues of stress, ambivalence and low motivation is to simply enforce the letter grade option amongst all students. If the school year had proceeded as expected, students would be subject to the letter-grade system automatically. The letter grade system should remain in place in order to establish consistency and familiarity in a time as unfamiliar as this pandemic.

Achieving satisfactory grades in the fourth quarter will not be an arduous task, as most of the assignments have been purely trivial and consist mainly of busy work. The influx of completion grades and simpler quizzes will cause grade inflation—a promising side effect to all students. This makes the ingratiating  ease of the pass-fail system unnecessary.

An outbreak that has reached the scale of COVID-19 hasn’t occurred in the U.S. in recent history, and no one could have predicted the repercussions at the beginning of the school year. That said, it is the district’s responsibility to facilitate a sense of academic routine, which ultimately means receiving letter grades.