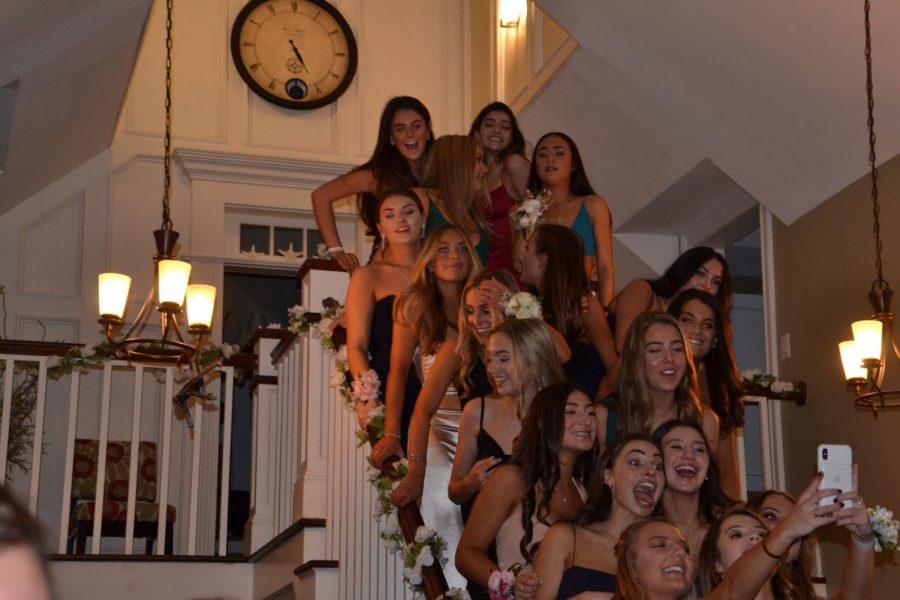 Students gathered with friends before the dance to take pictures with their friends and their dates before they arrived at the dance.

After having attended the Counties assembly dance (one of the most stressful events of junior year), I felt that the event was very underwhelming.

The first problem that I found was that the designated attire was not fitting to the venue and agenda of the night. I spent weeks on end stressing about my hair, makeup and spray tan appointments for the big school dance that seemed to be the only thing anyone could talk about. Everyone who attended the dance showed up looking their absolute best. But for what? Just to stand around the Stamford Marriott and beg the chaperones to let them leave early?
When the dance date approached, I realized I hadn’t really spent much time thinking about the actual dance at all, as I was distracted by figuring out my pictures group and after-party plans. I remembered some seniors saying that Counties was the worst of all the dances, so I went in with low expectations.

As I danced to all of the classic party songs, I felt like I had been transported into a seventh-grade bar mitzvah. Crossing my feet to “Lip Gloss” by Lil Mama and dropping to the floor during “Low” by T-Pain, I could have sworn I was 13 again, which was a little strange considering I am now 17.
After about 10 minutes of dancing to the most well-known dance songs of the past decade, all I wanted to do was take my heels off. I felt like there should have been a bin of colorful high socks being passed around by the cringey MC, but instead, I was expected to suffer through the pain from 7:30 p.m. to 10:00 p.m.
When the end of the night arrived, everyone swarmed out of the ballroom in hopes that they could escape the dance as soon as possible. We awkwardly stood there in our dresses and heels counting down the seconds until they let us leave because the dance was simply just too long. The three hours did not go by quickly; in fact, it felt like a lifetime.

As we lined up to go, we stuffed our faces with chicken nuggets and pigs-in-a-blanket, knowing we wouldn’t be eating for the rest of the long night ahead, which felt unfitting considering we were in ball gowns and suits.

If the Counties venue had been more formal, I would have felt more comfortable being all dolled up in a fancy dress. But because it was casual and lacked excitement, all I wanted to do was go home and change. The feeling of being at a bar mitzvah at such an old age felt peculiar and made the night go by painfully slow.

The night felt extremely casual and was a little bit of a disappointment. The Counties Assembly board should work to make the night feel more like a black-tie event.