Yang distinguishes himself through plan for American democracy 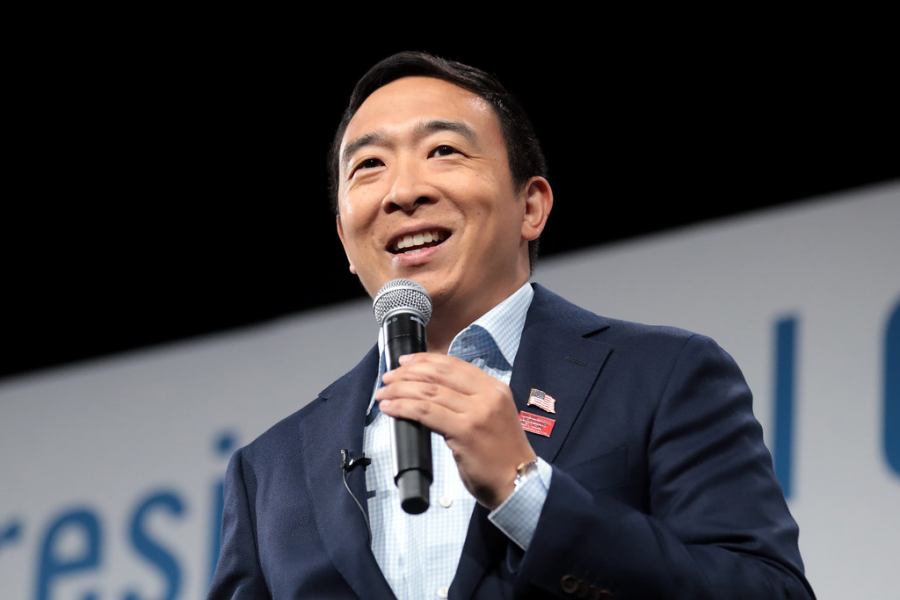 But I’m also sick of talking about Trump. In order to stop talking about him, we need to beat him. There are over a dozen Democrats currently vying for that opportunity, but one separates himself from the rest of the pack.

Andrew Yang is the best candidate running for the Democratic nomination because of his sound economic position and his wide-ranging, brilliant policy platform.

America’s economic prospects are gloomy. Unsustainable fiscal policy pioneered by Trump will disproportionately benefit the extremely wealthy and increase the national debt by nearly $2 trillion, according to the nonpartisan National Bureau of Economic Research and Congressional Budget Office, respectively. Automation will further threaten the United States economy because a third of American jobs are at risk of being automated away by 2030, according to CNBC.

Yang’s solution to this problem is superior to that of his opponents: the Freedom Dividend, which would give $1,000 every month to every American age 18 and up, no questions asked. This would not only alleviate inequality and our deficit, but would have countless other benefits as well. It would grow the economy and create nearly 5 million new jobs, the Roosevelt Institute says. It would spark entrepreneurship, sending a message that every American is valued.

The most frequent reservation I hear about this particular idea centers around questioning how Yang plans to pay for a universal basic income. The money will primarily come from his value-added tax idea. This fee will solve the problem that it’s just too easy for businesses to move money around to avoid paying up. The Institute of Taxation and Economic Policy, after analyzing Amazon’s financials, found that the company didn’t pay a dime in federal taxes last year. Think about that: Amazon, who earned profits of over $11 billion in 2018, paid less in taxes to the United States than my 83-year-old grandma. That’s immoral.

A value-added tax charges companies each time they add economic value to a product. This makes taxation much more difficult to evade for companies and will make America’s way of collecting revenue fairer and more effective. Combined with the economic growth that the Freedom Dividend will generate, the value added tax will pay for his plan.

Economic policy aside, what most appeals to me about Yang is that he doesn’t focus solely on sweeping reform to American society, but also pays attention to the details that make a big difference. For example, one policy that he supports is the elimination of the penny. Yang understands important issues on the macroscale, but doesn’t neglect comparatively smaller details.

Yang’s website policy page includes over 160 specific laws, regulations, taxes and initiatives he aspires to implement. No issue is too small for this campaign—the regulation of online poker, free marriage counseling for all, getting rid of daylight savings time switches—Yang has an overarching plan for democracy. Creative solutions that simultaneously benefit disparate groups of the American population exemplify the very campaign that Washington needs: one which is focused on the people. Moreover, Yang’s stances are subject to little questioning due to the nuance of his platform. With this candidate, you know what you’re going to get.

Finally, I want to address an extremely frequent and frustrating rebuke of who I support. When I tell people that I like Yang, many deride me because his nomination is unlikely. I am not going to deny that my candidate’s path to the White House is daunting and difficult, but he has a serious shot to win the Democratic Party’s nomination.

Yang began his campaign with zero name recognition, zero political experience and polled at 0%. He has now beaten several members of Congress already in this campaign, raised $16.4 million last quarter and is polling among the top five Democrats. Yang himself described his odds to win best on Twitter.

“Going from anonymity to fifth place is almost certainly harder than going from fifth place to first,” he said.

This presidential campaign began with Yang’s email list. Now it has garnered hundreds of thousands of supporters, and is growing every day of the campaign. He has a better shot than most give him credit for.

After the election of 2016, America needs another shakeup, but this time to get our politics back on track. Yang separates himself from the rest of the field because of his economic plan and ingenious policy approach. He is the candidate I want. He is the president we need.