Students from the period five Latin class venture down to the courtyard to complete their assignment on a sunny day. 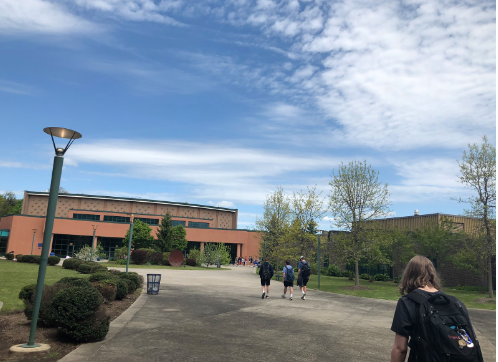 Students from the period five Latin class venture down to the courtyard to complete their assignment on a sunny day.

As summer is approaching and the weather is getting nicer out, it makes sense that students are asking their teachers to hold class outside for once. After being inside hour after hour, day after day, month after month, the same routine can get pretty boring. If teachers were to allow classes to be held outside every once in a while, students would be much more productive and motivated to get work done.

Class shouldn’t be held outside every day, but it would be nice to change the class setting on days with nice weather. Students can get some fresh air which would not only help them focus for that class period, but also for the rest of the day.

It is understandable that some periods need to be in a classroom setting when maybe learning a new unit in math or needing the smartboard when watching a video for a social studies class. However, if some of my classes took place in the courtyard when we were just doing practice or review of a unit, I believe my classmates and I would benefit.

If it’s one of the last few periods of the day and everyone is just counting down the seconds until the bell rings so that they can go outside, nobody is going to be able to focus and get work done. So, if teachers allowed students the chance to show that they can focus outside, they would be even more productive.

All this sounds great, but while some students may focus better, others may get even more distracted. A way to help this would be to use outdoor classes as a reward for getting things accomplished in the classroom. Having a balance of focused learning in class with some outdoor reward would be a great combination.

AP classes pretty much end after AP tests, so instead of working on a project for that class inside, students could possibly get even more done if they were in some fresh air.

I don’t think that having scheduled blocks of which classes are able to go outside would work because there isn’t all that much space in the courtyard for every class to be outside. But, if more teachers were open to the idea, I think students would be happier and more well behaved when in class.

Being outdoors for a little with classmates gives students something to look forward to throughout the day. Kids also are able to get off their screens and enjoy being outside, which we could all use more of.