Zion Williamson tears his shoe, along with people’s interest in Nike 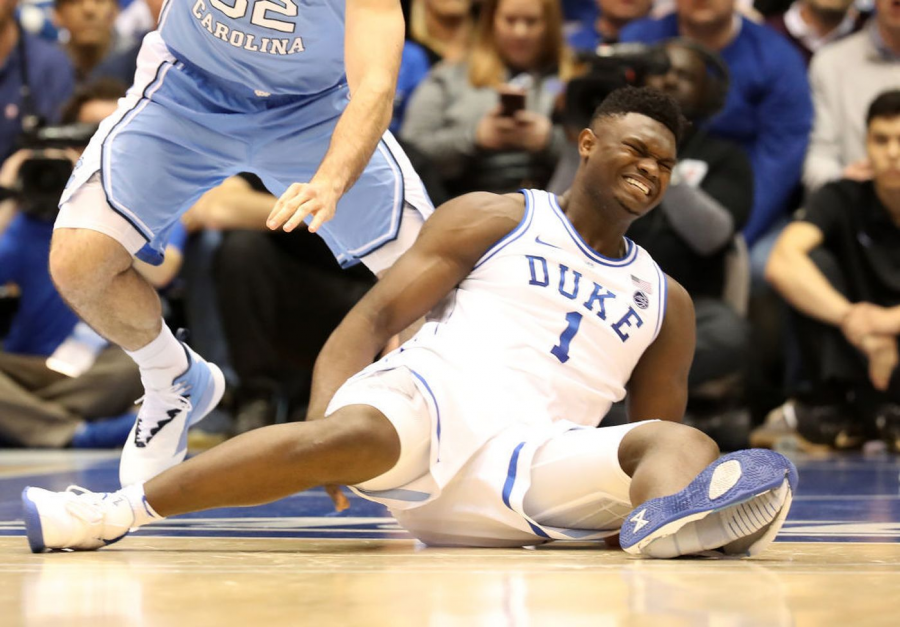 Luke Maye (32) gets the ball as Zion Williamson (1) falls after his foot cuts the bottom of his Nike shoe.

It was Feb. 20, 2019, when Duke and North Carolina faced off for their first matchup of the season. They have the strongest rivalry in college basketball and one of the most exciting in all of sports. The stakes of the game were high, with Duke bringing in one of their best teams containing the top three recruits from the offseason, and North Carolina being ranked number eight in the country.

It was during the first possession of the game when Duke superstar Zion Williamson called out a play from the top of the key, started to drive in and then the unthinkable happened. The bottom of Williamson’s Nike shoes ripped in half, resulting in a sprained knee which has made him miss many games. With the possibility of this happening to anyone, people started to feel unsafe wearing Nike shoes to play basketball. Nike’s stock dropped overnight, and with all the competitors in the basketball shoe industry, Nike shouldn’t be the number one choice.

Competitor brands Puma, Adidas, Under Armour and Jordan all offer high quality shoes and have built their reputation up through hiring basketball players to wear their shoes. Stars like Steph Curry, Klay Thompson, Kawhi Leonard and first overall pick in the 2018 draft Deandre Ayton aren’t signed with Nike. If some of the best players in the world feel confident playing in non-Nike shoes, everyone should as well.

The risk of wearing Nike shoes while playing basketball is much higher than the reward. Even though Nike has all the hype for dominating their market for such a long time and sponsoring some of the best athletes in the world, this situation with Williamson will be detrimental to their brand. The right move for consumers is to divert from Nike and put their money into another brand.

Along with potentially losing a lot of customers, they have also lost a lot within their stock. That night the stock dropped down from 84.84 to 83.57 percent, which comes to around a loss of $3 billion Additionally, Nike released its self-lacing shoes which did not work for some users adding onto the drop in stock. Nike is justifiably losing customers left and right because of these errors in design.

The argument could be made that Williamson’s shoes were custom-made for Duke and weren’t ready to be released for sale yet, so no other consumer could be in danger. But, Nike should never give out any shoe that they don’t feel 100 percent comfortable with anyone wearing.

Williamson has given us a reason to transition away from Nike to another brand. Whether it’s your shoes or your investments, we must capitalize on this opportunity.