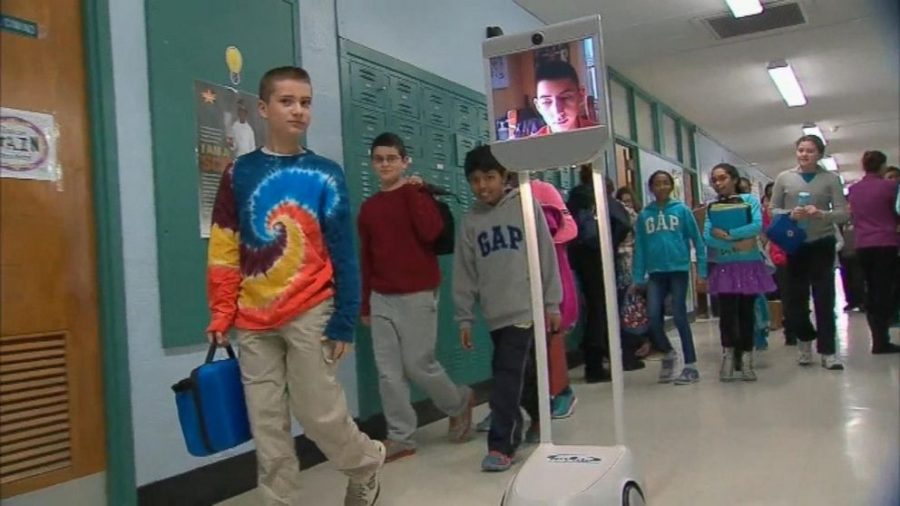 Students walk in hallways to get to class as usual, while their peer who was out sick is wheeled around on a rolling screen. This student was able to keep up in class and is another futuristic alternative to keep kids up to date when they have to miss class.

Imagine it’s the middle of January. The freezing weather is setting in as you attempt to take on second semester. Nothing feels better than walking outside in the 12 degree weather and practically getting frostbite. To top off the thrill of winter, your flu test just came back positive—an annoyance, surely, but not a rarity. You won’t be able to attend school for an entire week, and the panic of having to make up a week’s worth of work quickly commences.

To combat the prevalence of students not attending school due to illness, I think that it would be very useful for students if teachers recorded videos of classes daily and uploaded them to Schoology. This would not only aid students out sick, but it could also help kids when studying, as they would be able to review topics discussed in class.

Instead of turning to YouTube videos for help before a test, being able to rewatch something your teacher said in class is so much better. Some other videos don’t quite explain topics as well as your teacher may.

Being able to replay entire class periods could certainly come in handy—even if a student is able to attend class. For example, students would be able to ensure that they understand everything that you need to for an upcoming test. They could review difficult lessons at home if they remain confused. They could recount specific tips their teacher mentioned. Sometimes topics are taught differently, so having exactly what your teacher mentioned in class at your fingertips for easy access at anytime is extremely helpful. For me personally, when I’m studying or doing homework, I often wonder, “how did my teacher solve this again?” or “what did my teacher say to remember about this topic?”

I haven’t heard about many schools doing this, but I don’t see why they wouldn’t be open to it. Compared to other solutions to this problem—solutions that usually involve a large price tag—recording classes would not be expensive.

More expensive ideas include spending large amounts of money on brand new cameras to record or even have robots to wheel around the school to in order to keep students updated when they are out. But, by simply recording the class period on a teacher’s phone set up on the side of the classroom and uploading to schoology, it is much more efficient.

Similarly, it would cut down on wasted class time asking questions that were previously explained in class. I think this could be a great tool in furthering our education.

It makes sense to use more technology to our educational benefit, so by doing this simple task of recording class periods, students would gain a very valuable resource.