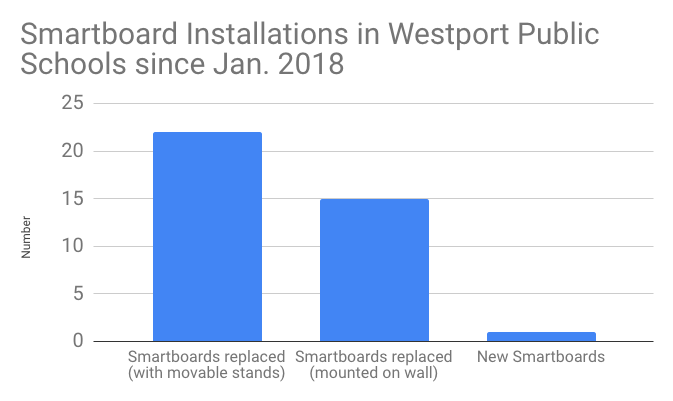 In Westport, there is one feature that defines nearly every classroom. It’s not living, nor is it figurative. Most of the time it is dark and inactive. Yet education at Staples would not be the same without it. For nearly a decade, Smartboards have been an integral part of learning in our school.

The relocation of world language teachers to new classrooms in wake of the implementation of the Eighth Grade Academy has resulted in many teachers having to work with unfamiliar technology. Some are teaching in the world language labs and others are in classrooms without Smartboards at all. As we have already invested so many resources into this technology, the administration should be making the utmost efforts to put it into use, as teaching otherwise is hindered.

Because they have been around for so long, Smartboards have been integrated into many educators’ teaching styles. They use it to project lessons, assignments, notes, presentations and encourage student interaction by allowing them to write, draw and participate in various activities on the board. Just recently in my math class a Smartboard was crucial to my understanding of a concept––I was having trouble visualizing a shape in three dimensions, but after the teacher showed the class a virtual model which they were able to rotate and scale in real time, I finally grasped the concept.

Some displaced world language teachers have taken up residence in the world language labs, which are special rooms designed so teachers can record students and their conversations with classmates using a software called Sony Soloist. The rooms are set up so that students each have their own desktop computer, and the teacher has the ability to “share” their screen with other computers so that students can view it––just like a Smartboard.

But even though the labs perform similar functions to Smartboards, they aren’t suited for everyday teaching. The individual booths isolate students from each other and their teacher, and students aren’t able to write or draw on anything. In short, the learning environments of classes taught in world language labs are not as interpersonal or interactive as regular classes equipped with Smartboards.

In recent years, there have been budget cuts to many different school resources, notably music and arts programs. Yet every year we have purchased a new Smartboard (or at least replaced one) which costs hundreds of dollars. Lack of resources shouldn’t be a problem. What about the currently unused Smartboards at Coleytown Middle School? They could be reinstalled in classrooms without Smartboards at Staples. Staples teachers shouldn’t have to go without Smartboards, especially if the Coleytown Academy is going to be staying for an extended period of time.