Girls code into the future of STEM 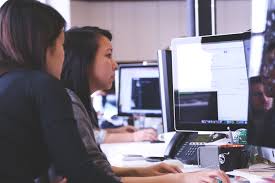 The next generation: we envision new science; we envision new treatments; we envision new solutions. Yet we continue to restrict half our population from making this possible. We create dreams and set them up to be approximately 50 percent less likely to occur. We do this by reinforcing gender stereotypes in science, technology, engineering and math (STEM).

Girls Who Code is a Staples club that attempting to break those stereotypes by providing females with the opportunity to practice computer programming in a safe environment. During the Involvement Fair, there were many whispers about the sexist nature of the club; however, Girls Who Code is not sexist, as it allows girls to have equal learning opportunities that males have and is not discriminatory in its guidelines.

As of 2017, only 24 percent of STEM jobs belonged to women. This number is concerningly low and is enough reason for clubs targeting females in STEM to form. According to idtech.com, girls grow interested in STEM at age eleven but lose interest around age fifteen. This is due to social factors and a lack of access to materials.

Girls Who Code allows girls to hold onto this interest by providing them with a community who holds similar interests and ideas. By forming such alliances, young girls are less likely to disengage from their interest for social purposes, as they are surrounded by a similar group.

The number of women in computer science majors is only 16.5 percent; practically all students in this major are men. Girls Who Code strives to close the divide between the genders and STEM, rather than discriminate. The club simply seeks to provide girls with the opportunity to explore their interests in a safe environment.

In addition to this, the club guidelines are not discriminatory. Girls Who Code is targeted at girls, but is open to all genders. They do not have the right to deny males into the club or favor one sex over the other. In fact, according to club president Electra Szmukler ’19, about one-fifth of sign-ups this year were males.

Regardless of such, the club is still labeled as sexist. This is most likely due to a lack of understanding as well as miscommunication. If people were more aware of the complications regarding females interested in STEM, perhaps criticism of a club encouraging girls to explore computer coding would not receive such harsh commentary. This club works to close a gender divide, not open a new one.