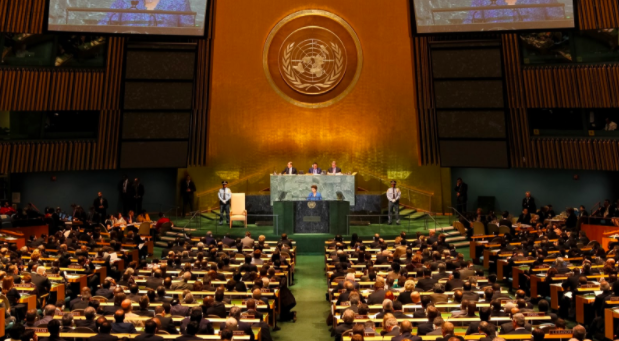 The UN held a vote declaring Israeli settlements in the West Bank and Jerusalem illegal last December 23. The drafted resolution, Resolution 2334, called for an immediate end to the settlements and was approved by a council of 14 nations, including New Zealand, Malaysia, Venezuela, Senegal and not the United States, as President Obama abstained from voting.

The settlements in question are home to about 600,000 Israeli citizens; Palestine claims the settlements are on its land. If it weren’t for Prime Minister Bibi Netanyahu stubbornly ignoring the resolution, construction would stop and no more people would be allowed to move to the settled areas. But this latest vote doesn’t just represent the UN’s blatant anti-Zionism; it represents Obama’s disgraceful lack of respect for Israel and its people.

The UN has had a long and open history with anti-Israel bias, from a resolution in 1975 declaring Zionism to be racism, to hundreds of anti-Zionist restrictions passed by the General Assembly since its creation. More recently, and perhaps most frustratingly, have been the actions of the UN Human Rights Council.

Since its creation in 2006, the UNHRC has presented 117 condemnations of various countries for human rights violations – and it has condemned Israel sixty-two times, according to the Officer of the High Commission of Human Rights website. Israel, a liberal democracy, receives more negative attention and criticism for human rights violations than Syria, Pakistan, North Korea, South Sudan and Saudi Arabia (which hasn’t even been investigated once).

Because of this, resolution 2334 comes as no surprise; at this point the UN might as well be a slave to Palestine’s will. It’s simply upsetting that bias like this is still unrecognized. Alas, the organization once built on lofty and noble ideas like global freedom, diplomacy and fundamental human rights continues to descend into a mess of scheming, corrupt politicians who care more about their agendas than compromise or peace.

More unfortunate is the Obama administration’s abstaining to vote on such a critical decision. Netanyahu urged Obama to veto in a tweet just a few days before the resolution 2334 was passed; and immediately afterward, the Israeli government criticized him for abandoning America’s closest ally in the Middle East and harming chances for Israeli-Palestinian peace talks with the US in the future.

That Obama would consider this situation, be called upon to vote, possess the power to veto the entire resolution, and literally refuse to do anything, is shameful. He has sealed his position in US history as having one of the worst personal relationships with an Israeli Prime Minister ever. He is ending his presidency, which has shown mostly consistent support for Israel, on a poor note.

Critics of Israel say the settlements were hindering the peace process and any hope of a two-state solution. Obama described his reason for abstaining as a balanced measure to ensure less violence between Palestine and Israel, but if anything, it’s his unwillingness to vote that will damage hopes for peace. In undermining America’s relationship with Israel, Obama has shown the extent to which world powers can recklessly abandon them – which will only allow other nations to do the same.