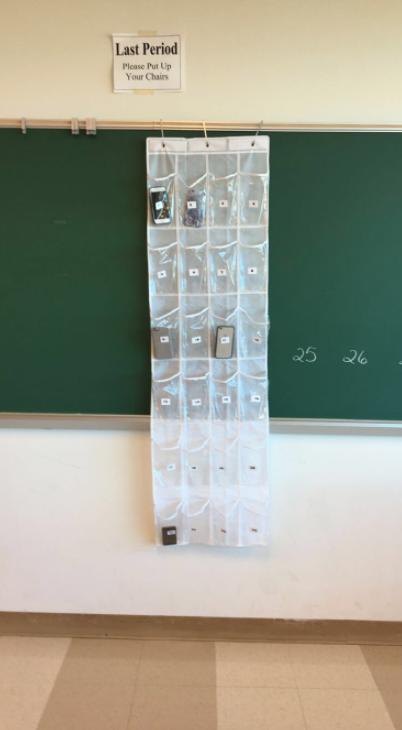 The beginning of the 2016 school year has brought many changes to the learning environment here at Staples High School, specifically a fresh set of rules regarding technology implemented by our new principal, James D’Amico.

Teacher Rebecca Nickles of the math department implemented phone slots in her classes this year. Phone slots provide an organized way to keep phones out of a students’ possession during the class period. They are similar in style to an over-the-door shoe organizer.

“In class, it is almost more of a disruption to take a cell phone away from a student during class, it disrupts the lesson more for everybody else…[Phone Slots] just take all of those factors away if you don’t have the option to look at your phone,” explained Nickles.

As Nickles stated, cellular devices are providing more than just individual distraction and can end up causing a disruption on the class-wide level.

Not only is it distracting, but it can also be used as a form of cheating during quizzes, tests, or other in-class assignments.  Students have access to the Internet and can search up answers to graded questions. This is not only cheating but it does not help your education. It is just another downside to having cell phones in the possession of students during class.

Cyber bullying is also enhanced through the use of cell phones. Students are able to circulate rumours more efficiently through social media platforms. Students will be at a higher risk of distraction while they are using their phone to text and/or spread gossip throughout social media.

Even so, many students are against the idea of giving up their cell phones during class.

“It’s an inconvenience and I think that it’s a student’s own responsibility to pay attention in class and it’s not up to the teacher to regulate it,” stated James Trinkle ’19.

While Trinkle’s statement is valid, many students at Staples are not understanding of how lucky they are to be given the educational opportunity they have. It is a student’s responsibility to pay attention during class, but teachers should have the power of implementing rules to promote scrutiny throughout classes, at least to a certain extent.

Although many students may disagree with the idea of giving their phone up, it will inevitably benefit students in the long run. Education should be a priority of all high schoolers, and the elimination of distraction through cellular use during class will raise your chance of success in the future.