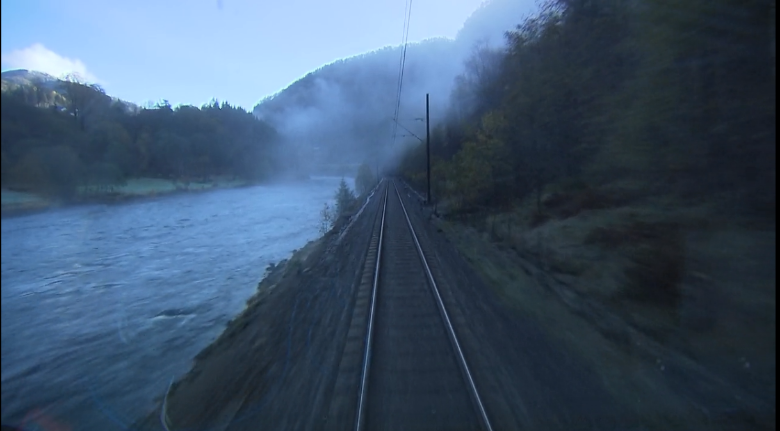 Television is now on the same page as classic literature, films and music, in regards to the fact that you, as an educated young adult, are expected to be able to hold a conversation about every new and trending show at any given time. But, with Netflix constantly releasing new shows and seasons, it’s impossible to keep up. One of the newest shows released in August (if you can call a seven hour train ride a “show”), is a series of Norway’s “Slow TV” episodes. They range from over 11 hours to under one hour, showing various slow activities like a train ride, firewood or knitting. I watched their first episode, “Train Ride Bergen to Oslo” so that you can discuss it in civilized conversation without having to actually watch it. You’re welcome.

The first minute was exciting. The last few passengers were getting on, and when the train finally started to move, an anticipation similar to that at the start of a roller coaster grew. It soon dispersed when the next six minutes were in a tunnel, making the whole screen pitch black for the duration. Throughout the rest of the hour there were nine. More. Tunnels. Each time I would see my reflection in the black screen, I wondered why I had condemned myself to watch nothing (literally) for seven hours on a Sunday morning. (The answer, I realized during the seventh tunnel, was avoiding homework, of course). As the title indicates, everything else was just slow. Overall, the scenery was decent. The train was running parallel to a river on one side and hills of trees on the other, always going towards a snowcapped mountain in the distance.
Highlight: The conductor welcoming everyone in the beginning. It was very exciting. Although it was in Norwegian, so I’m not actually sure.

As hour one changed to hour two, the landscape changed to luminescent green grass on both sides. Soon, the river came back on the left, this time with white rapids flowing over rocks, making my mind drift to white water rafting for a few minutes. I’m pretty confident I didn’t miss anything though. Tragedy struck halfway through when a few droplets of water got on the camera lens. The frustration of wanting to wipe them off was almost unbearable. Luckily it was a gorgeous sunny day there, so they were gone in only 10 minutes. When the conductor came on the speakers again, I thought to turn on subtitles. With this newfound power, I learned that they were filming this for the Bergen Railways 100th anniversary in November of 2009. Happy almost 107th!
Highlight: It passed another train near one of the stations. Extremely thrilling.

The landscape changed again as hour three began. This is what I had been waiting for. The snow capped mountain in the distance for the first two hours was finally encompassing the train. The snow covered tracks and rocks are mesmerizing. Even the tunnels now are more like beautiful wooden caves carving through the mountain peaks. It looks magical. Though, during a particularly long tunnel section, my interest diverted and I opened a new tab to look up pictures of Norway. Yet, although I knew I wouldn’t be missing anything on the show, I found myself constantly clicking back to the Netflix tab just to make sure nothing changed. I must admit, I was hooked.
Highlight: The entire thing. This one was really, really beautiful.

My excitement from the last hour fell as the train started moving further from the snow. For a solid three minutes I wasn’t sure if the video was actually working or not because it was completely still. Turns out it was; it was just a really boring part. As was basically the entire rest of the hour. If you wanted to watch this in only six hours, I would say you could skip this part.
Highlight: A guy came in front of the train at one station to take a picture of it. It was the most human interaction I had encountered in hours.

Luckily, there hadn’t been any tunnels for quite some time.The landscape was relatively boring (forested hills on both sides, a lake popping through occasionally) for the first quarter. And the second quarter. And the third. And the fourth. Maybe this would be the hour you’d want to skip if you only have six hours to watch it. It’s up to you.
Highlight: There were sheep! Or maybe they were goats. It’s possible they were cows. Or it could have been horses. Either way, there were four-legged animals romping around a pasture for a few seconds.

Refer to hour five for a description of the first half of hour six. After the halfway mark the action picked up a bit. The train passed through some cool towns, giving a glimpse of what towns in southwest Norway look like. Although apparently the towns are very small because we were back in the wooded hills within minutes for the duration of the hour.
Highlight: I think I’m starting to pick up some Norwegian. Kul!

There was a lot more civilization for the last hour. And even a few dark tunnels for ol’ times sake. It was sad to watch the screen fade to black in the last 10 seconds as my train ride came to an end. It was also very frustrating to have sat through the seven hour train ride like all the other passengers, yet still be stuck at my desk in Connecticut when everyone else got rewarded for their time with an adventure in Oslo, Norway.
Last remarks: Although the scenery was interesting and sometimes even peaceful (I’m looking at you, hour four), that next time I take a seven hour train ride, I better end up in a different place than when I started.