The Jabs of the 2016 Election: Unfiltered, unnerving and unfair 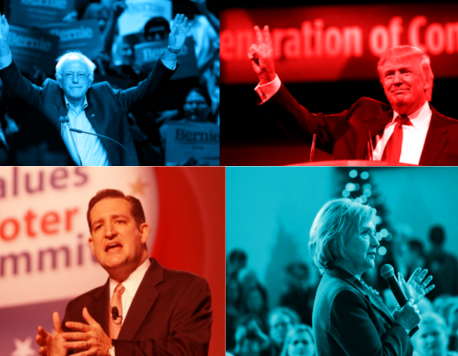 Way back in October, Ted Cruz blasted his CNBC moderators and passionately proclaimed before a national audience that the race he was fighting in was “not a cage match.” The American people deserved a debate, not a roast, and he would not indulge any network’s thirst for insults. Not less than six months later, Cruz called fellow candidate Donald Trump a “snivelling coward.”

Yes, this election has been crackling with insults. When Marco Rubio was still in the race, he spent one rally reading  Donald Trump’s tweets and ripping them apart one by one in a move that would make Regina George blush.  A few weeks Trump mockingly referred to Rubio as  “little Marco” in a debate and after took to Twitter to threaten he’d “spill the beans” on First Lady-hopeful Heidi Cruz, implying there’s promiscuity or foul play afoot.  Want to know what an erupting political party sounds like? Apparently, like this…

Yet, as entertaining as this bluster has made communication time in A.P. Gov., it needs to stop. I’m appalled at the fact that we are knee-deep in selecting a commander-in-chief who will have to go toe-to-toe with I.S.I.S, fix fledgling entitlement programs and deal with the  social shifts rocking this country  yet the conversation still lingers on visceral, downright idiotic jibes, whether they concern Trump’s tiny hands or the latest on Mrs. Cruz.

Stop rewarding this posturing and childish dialoguing. Quit gobbling up these showy spats every time they happen and, hopefully, the media will follow suit and cease to fan the flames (I don’t need a breaking news alert for every mean Trump tweet. I have enough problems just keeping up with my group chats.). If you don’t like what’s being said, the conversation has to be changed; let’s reel this back into the actual issues so we can truly measure who’s best qualified for this job.

Look, I know how this came about: voters got sick of the tight-lipped, coy, pandering candidates that have plagued the stage every four years. They wanted some raw, passionate arguments made by real people and I do get that temptation (that temptation, in fact, is the reason this year’s ticket is populated with radicals and outsiders). I do want to see a candidate who is as angry or vehement as I am, everyone does. Yet that intensity is immediately negated by the superficiality that debate style promotes. It’s reduced an array of seasoned politicians into mere bullies.

Maybe the American don’t deserve dull discourse dominated by esotericism but – in this hallmark election especially – we don’t deserve a cage match either. To both candidates and voters: start acting like it.