Shuffling through Netflix, episode by episode 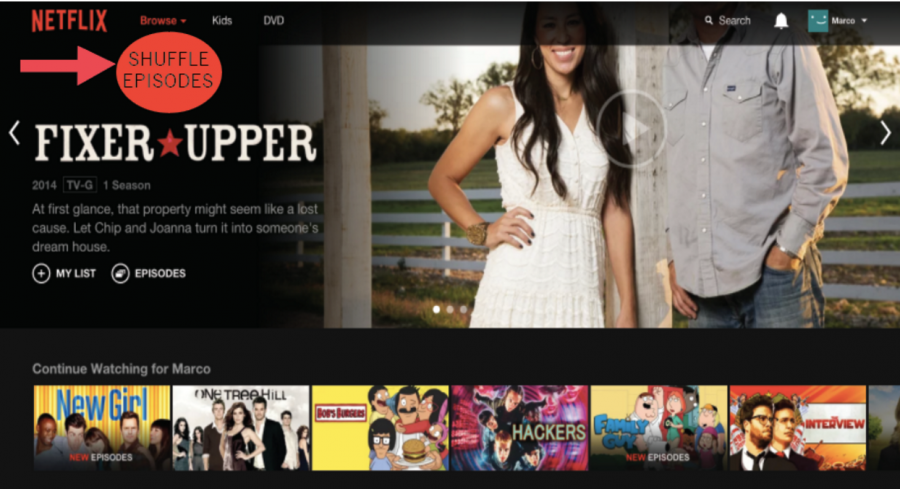 This is what your typical Netflix night looks like. After a long week, all you want to do is find an episode of “Friends” you haven’t seen, curl up with some hot cocoa, and not move for the next four hours. However, you’ve already seen most of the episodes numerous times. All you want is that perfect moment where Chandler says something so random but so funny; however, you don’t where to find it. At this point, you’re really wishing for a Netflix shuffle button.

Watching an intense part of a show is fun after you have finished the series because you already know what will happen. Shuffle buttons would provide people with the rollercoaster of emotions you knew and loved from the first time, and heighten them.

Choosing one episode over another would be like choosing between cheese and chocolate: It simply cannot be done. So shuffle buttons would be a great addition to the Netflix family, providing people all around the world with the exhilaration and anticipation of watching their favorite show over and over again. People would want to finish one episode, just so they could hit the shuffle button and be given another.

Sometimes when people watch a movie for the second or third time, they notice things in the movie they didn’t notice before. A shuffle button would not only bring one joy, but also let shed light on the show.

However, if you’re like me, you don’t want to put in the effort of looking for that one specific episode. Netflix’s best feature at the moment is the fact that we can sit there and wait 15 seconds, while the next episode of the show loads. After watching hours upon hours of a show our brains cannot function to decide what episode should be on next. Yes Netflix, we are sick and tired of choosing the best “Grey’s Anatomy” episode, so please just make it easier on us.

I’ve watched “One Tree Hill” at least three times through, although sometimes it’s nice to just watch one singular episode of the show. As much as I would love to watch the show for a fourth time, it would be a little excessive, and I would want the episodes chosen, to let me relive the emotions of excitement and nervousness I had when I first watched the show.