Find another way to stop violence 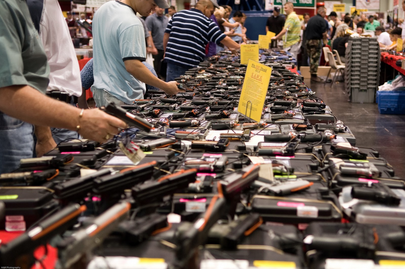 The Founding Fathers urged the colonists to break away from Great Britain and create a new government because they strongly felt that the purpose of a government is to protect its citizens’ fundamental rights.  “That to secure these rights,” the founders stated in the Declaration of Independence, “Governments are instituted among Men, deriving their just powers from the consent of the governed.”

You are probably thinking it is so cliché to quote the Declaration of Independence.  It is cliché, but only because it is so engrained in everyone’s mind.  Every person in the United States believes in that value of protection of fundamental rights.

When both the Declaration of Independence and the United States Constitution were written, there was such a fear of having these rights oppressed by a central authority that it was demanded by opposers of the Constitution to add a Bill of Rights, a.k.a. an enumeration of some fundamental rights that the federal government cannot violate in the future years of the country.  Yet in modern times we have reached a crossroads, a conflict between two of these most basic rights: between the right to life and the right to defend oneself from attacks, otherwise known as the gun control debate.

Although there should be some regulation on the sale of guns, the core principle of the right to own weapons remains important today as a reflection on an the individual liberties to which we are all entitled.  Yes, owning an assault rifle is not necessary, and no one should be able to own an assault rifle without extensive background checks and clearance from the highest authorities.  But we should be very, very careful in rolling back fundamental rights that our founders thought were critical enough to put in the Bill of Rights for the purpose of limiting a central authority’s power over its citizens.

Liberals say that one of the best ways to ensure that guns are not used improperly is to restrict them to only police and military personnel.  Yet this is a misinterpretation of the text of the second amendment.  The amendment explicitly says: “A well regulated Militia, being necessary to the security of a free State, the right of people to keep and bear arms, shall not be infringed.”  Though the exact meaning of this wording is open to debate among both liberals and conservatives, this wording has been interpreted by the Supreme Court of the United States in the case District of Columbia v. Heller, which ruled for protecting an individual’s right to own a firearm.  In the majority opinion, Justice Antonin Scalia wrote that “Nowhere else in the Constitution does a ‘right’ attributed to ‘the people’ refer to anything other than an individual right…the ‘militia’ in colonial America consisted of a subset of ‘the people’…Reading the Second Amendment as protecting only the right to ‘keep and bear Arms’ in an organized militia therefore fits poorly with the operative clause’s description of the holder of that right as ‘the people.’”

People can read into the second amendment and make their own judgements and interpretations of what it means, but it is the law of the land that the second amendment literally gives individuals the right to bear arms, not just a militia.  In selectively allowing certain people to own a firearm, not only will the second amendment be violated, but the precedent from the Heller decision will also be completely disregarded.

Perhaps the biggest argument for gun control supporters is they believe that the amount of gun ownership in a country has a direct correlation with the amount of deaths in a nation.  Thus, in order to promote the general welfare, the law must restrict the use of guns.  Sounds logical and true, right?  Yet using this logic, it is like saying that in a town where 50 out of 100 people own guns, 50 out of 100 of the people are murderers.  That is what direct correlation means, not just an increase, but a direct increase.  The reality is that when we have strict gun law restrictions, they do not work.  Take Chicago, for instance: according to the Institute for Legislative Action, the year before its strict gun ordinance in 2010 was enacted, there were 374 gun-related deaths, and after it was enacted in 2010, 432 people were killed by guns and 500 were killed in 2012.

It’s also a misconception to think that limiting the amount of guns sold will eradicate the death and violence we hear about in the media. According to David C. Stolinsky’s “America: The Most Violent Nation?,” a more concerning fact is that murdering by strangling, stabbing, or beating is much more frequent in the United States than in any other country.

The claim that a country, because it gives citizens access to firearms, has a higher murder rate is just factually inaccurate.  The Harvard Journal of Law and Public Policy’s international case study “Would banning firearms reduce murder and suicide?” by Don Kates and Dr. Gary Mauser supports this fact: “There is a compound assertion that (a) guns are uniquely available in the United States compared with other modern developed nations, which is why (b) the United States has by far the highest murder rate. Though these assertions have been endlessly repeated, statement (b) is, in fact, false and statement (a) is substantially so.”  This of course does not imply that the opposite is true, that in well-armed citizen areas the gun violence rates are down.  This merely demonstrates that higher sales possessions of guns has no correlation with the amount of gun-caused murders in a country.

Yet most importantly, gun control supporters often fail to recognize that the intent of a criminal is to break the law, and thus the law does not apply to that criminal.  If a person, with obvious psychological problems for wanting the following, wants to kill mass amounts of people and then commit suicide at the end, that person is not going to care about laws against murder and violence because the consequences — lifetime in jail or the death penalty — are irrelevant.

Murderers, according to Delbert S. Elliott’s “Life‐Threatening Violence is Primarily a Crime Problem: A Focus on Prevention,” have a long history of violent behavior and psychological problems and they are the ones that no matter the regulation would find a gun to use, or if they don’t find a gun to use, then they will find another weapon.  Conversely, it won’t raise gun violence if law-abiding citizens use guns because they are not the ones with a history of breaking the law.  What is the purpose of enacting tougher gun laws when the people following them aren’t going to be the murderers that these laws are meant to target, and as consequence their fundamental right to defend themselves using a weapon would be revoked?

We have a gun problem in this country.  There is no arguing against that.  The inhumane shootings that have occurred at movie theaters, elementary schools, and now in Umpqua Community College in Oregon support this fact.  I am not an expert on this topic, and I don’t know how to fix it.  But adding more restrictions on gun sales and possession will be like shooting ourselves in the foot.