Wearing ties is a simply the better choice 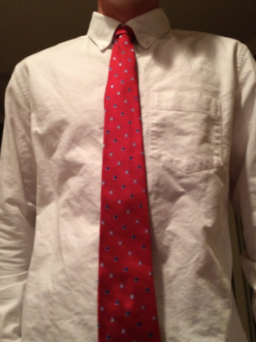 I consider my style of clothing to be very simple. Not plain–no, I am not a plain and unoriginal guy–rather far from grandeur. That is by choice.  However; I would much rather have my clothing style be like this.

I am not into flashy and outlandish apparel; I never have been.

This characteristic of mine leaves me in a little conundrum when it comes to dressing up for formals, family holidays, and just about any other event that would require a dress shirt and either a bow tie or tie.

The question I have to contemplate  during each of these events is whether or not I should wear a bow tie or tie?

Personally I would much rather wear a tie. I believe that they are much more formal and reserved, as opposed to a bow tie.

When I see people wearing bow ties, I think of high-class, arrogant and cavalier individuals, far from the man that I consider myself to be.

The persona that one feels when they wear a bow tie is simply something that I do not want to be a part of. That is why I believe ties are a much better fit.

When I am wearing a tie, I feel composed and confident. However this confidence differs from the confidence I would feel if I wore a bow tie because with the tie, I feel confident but not haughty.
With bow ties you have the two opposite ends sticking out, beckoning people to take note of this elegant piece of clothing. With ties you have one long piece. It may not be eminent, but it’ll get the job done.

The last reason why I would wear a tie over a bow tie is because it is so much easier to tie a tie than a bow tie. Honestly. I can do a half windsor knot in my sleep. Bow ties on the other hand are a different story. Maybe it is because I actually don’t know how to tie a bow tie.

I watched youtube videos when I was first learning to master the art of tying knots. I quickly caught on with the steps of tying ties and since then I haven’t looked back.

Cal Jr. from Talladega Nights: The Ballad of Ricky Bobby put it best when he described what he wants his clothing to say to those who see him wearing it: “I’m casual, but I also like to party.”