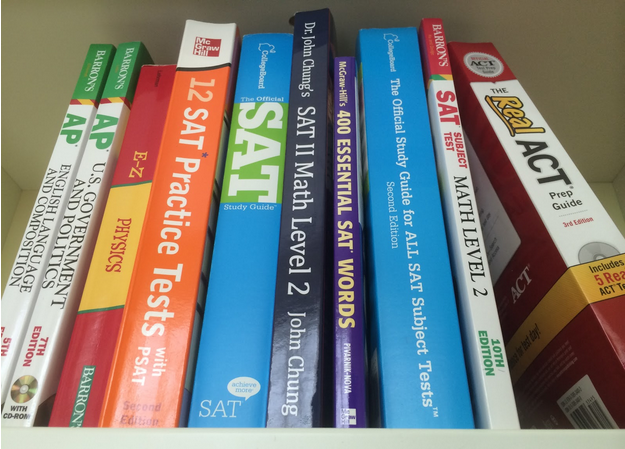 There are over 20 standardized testing prep books in my household alone.

Heading into the last quarter of junior year, I was feeling pretty relieved. I kept thinking to myself “I’m almost done!” The year notorious for perpetual stress is almost done, but boy was I wrong to relax.

It’s not junior year that should be feared, it’s fourth quarter of junior year. If you think you’ve had a lot of testing in the past, I pity your naivety.

What do AP finals, AP tests, SBAC, the ACT, the SAT, the SAT subject tests and regular finals all have in common? They are all stuffed into the two fateful months at the end of junior year between April break and summer.

What makes it even worse is that they are very important tests, except maybe for the SBAC whose necessity for school funding is debatable. According to The College Board, over 600 universities recognized AP exam scores for admission, credit, and placement. Additionally, the SAT/ACT is necessary to get into college, and finals are 10 percent of your grade in a class.

It definitely makes the most sense to take these tests at the end of junior year so that one is best prepared. However, the number of tests in close proximity makes it difficult to prioritize any individual test and turns the tests into a measure of mental stamina rather than mastery of content.

I do not need to explain that standardized testing itself is a flawed system, but having all of these standardized tests together diminishes the already minimal educational information they provide.

Instead of testing how well you have mastered AP U.S. History, the APUSH test really tests you on how well you can sort through the array of numerous terms, date and facts from six different subjects that have been crammed into your brain in the past week and find the information you’re looking for.

On the other hand, it could be argued that the lack of time to study actually produces more accurate results of retention of content; however, this assumes that taking numerous standardized tests in a row has no effect on how students perform on each individual test.

Another issue is that if one student takes an AP class sophomore year but chooses to postpone additional standardized testing, such as the SAT subject tests, their scores are hardly comparable to a junior’s.

However, there are some benefits to having so many tests all at once: you learn how to use time effectively and stay organized. It is imperative to plan out your time with so much studying to do (unless, of course, you’re one of those supernatural kids who doesn’t study, in which case, this doesn’t apply much to you).

Basically, there is not much that can be done to better the situation other than stay focused and remember that a stress-free test-free summer is right around the corner.