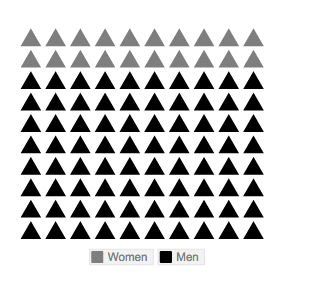 From rape culture to the wage gap to daily micro-aggressions, life for women isn’t so easy. Unfortunately, this doesn’t really ever stop, even for seemingly powerful women. Regardless of their political party or beliefs, female politicians have been attacked with sexist comments from the media, the public and even fellow politicians.

Most recently, Hillary Clinton has been the butt of many sexist remarks in the news. Apparently, being the former Secretary of the State and U.S. Senator still won’t spare you from comments about your clothes, your weight or your personality.

Recently, Rand Paul (U.S. Senator and possible presidential candidate) created a fake Pinterest profile of Hillary Clinton, mocking and pretending to be her, posting boards such as “White House Remodel” and “Power Couple.” Paul wasn’t trying to strengthen his own political career, he was trying to undermine a woman with mentions of stereotypical female activities.

The fact that a 52-year-old man spent his time registering the account, deciding what to post, picking out the specific photos and writing captions is pretty appalling. It’s not an easy thing to do. I almost want to applaud him for making such an effort.

Not only is the account painfully pathetic, it violates Pinterest’s Acceptable Use policy, which states that users cannot “impersonate or misrepresent your affiliation with any person or entity.” It is also a pretty accurate representation of the micro-aggressions women have to deal with just for being women.

When was the last time you read an article criticizing Jeb Bush for his fashion choices or new haircut? Why is the color of a politicians blouse considered newsworthy? These are micro-aggressions that females face daily, simply because of our biological makeup. Yes, women have the right to vote and aren’t expected to live up to all stereotypes, but that doesn’t mean that the fight for equal rights is over. Just as we have a black president, racism is still prevalent in our society. The same is true for sexism. The discussion around a female politician, especially in a political setting, shouldn’t be focused on her clothing or her haircut but instead on her politics. Until we see past the superficial, we will remain mired in prejudice and banalities.