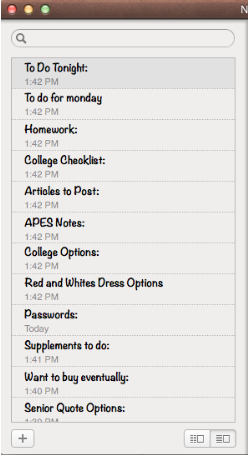 In sixth grade, I had a massive social studies project due. It was one of those projects that we had been working on for weeks and I had spent the entire night before perfecting. But when the teacher said, “Okay everybody hand in your projects,” it was gone. I scurried through my bag four times before I accepted that it wasn’t in there.

I was near tears when I approached my teacher to explain that it had to be sitting under my desk, having fallen off while packing my backpack the night before. With two working parents, I couldn’t be saved.

That’s when it all started.

Since that day, I’ve made lists for everything. Before I can do any work, I need to make a list. I go through every class that I have and put the assignments on different lists depending on their due date.

And I’m not alone. List making is a widespread way for people of all ages to stay on top of tasks. According to BBC, “Your mind loves it when a plan comes together – the mere act of planning how to do something frees us from the burden of unfinished tasks.”

Our brains are actually wired to continue to remind us of unfinished tasks, which is known as the Zeigarnik effect. The unconscious mind repeatedly asks the conscious mind to make a plan to complete the task. List making is the easiest way to stop the nagging from the unconscious mind by giving you the chance to actually see what you have to do, and make a plan for when you’re going to do it.

Completing the simple task of planning what you have to do can make the rest of your day, or even week, much less stressful.

Don’t wait until you forget your social studies project at home before you start making lists. Trust me, you won’t regret it.