Ferguson: what do we do now? 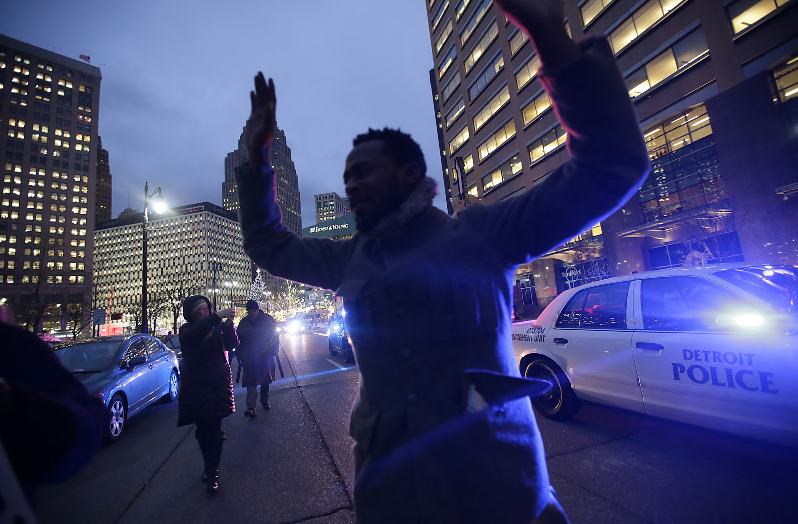 An 18 year old boy shot and killed in cold blood. Mike Brown’s life has been shooed away by a jury of nine Caucasian jurors and 3 African Americans.

Officer Darren Wilson was not indicted for the act of killing an unarmed teenager. I don’t understand how that could be.

It was complete overkill. He shot Brown several times, the last being the fatal shot. He said that Mike Brown turned to him with an aggressive face.

It could be racial, an aggressive face being that of color.

Although, I was raised with the African American side of my family and it is our protection to wear that face at all times. I was not raised in Westport. I was raised in the projects. I know what it’s like to be a black kid in America. You are seen by many police as suspicious. It’s a bias that will never fully evaporate from this country. We can’t grow up with the sweetest smiles when all we see are friends and family dying because of hate crimes and police brutality. We may be seen as lower by skin tone but we will not be oppressed for it.

Trayvon Martin had a bag of Skittles and an Arizona iced tea. He was killed by a white male, George Zimmerman, who was let off just the same as Wilson. The same goes for Eric Garner, who was choked to death by a police officer for selling loose cigarettes. That officer was also let off easy.

Nobody should be treated like a merciless murderer for petty crimes due to their skin color.

They could at least have evened out the jury to make it seem fair when the decision came.

I completely understand that the protests are out of hand. I understand Mike Brown was a little aggressive when stealing the cigarettes.

He still should’ve been indicted though. That’s all that’s on my mind. If Darren Wilson was a normal citizen, not a part of law enforcement, they would have at least indicted him.

Let’s stop the prejudice built hundreds of years ago that the darker the skin the worse the criminal. We need to come to terms with the fact that not every Caucasian person is in the right and not every African American is in the wrong.

When shots are fired, the people will hear them

Michael Brown’s death was undeniably a tragedy. The lack of indictment for the officer responsible for the shooting from the jury with a 3:1 white majority representation was very questionable as well.

However, looking beyond these immediate events, I think that the tidal wave of emotion and calls for change will help to inspire change for the better.

On the night of the announcement regarding Wilson’s indictment, there were large scale protests in hundreds of US cities, including Chicago, New York City, Oakland and Los Angeles.

There have been thousands of protesters arrested, some violent and some peaceful.

There have been many online petitions regarding the events in Ferguson, including one which garnered over 120,000 signatures in three days, calling for Wilson to be prosecuted. There have also been many people calling for police officers to be required to wear body cameras at all times to prevent incidents like this from happening again.

Unfortunately, what has been slowing progress of the possible movement is the manner in which many protesters choose to make their voice heard. There has been an abundance of looting, vandalizing and destruction of public property, with an estimated $23.5 million in damage.

This was not what Michael Brown’s family intended.

“While we understand that many others share our pain, we ask that you channel your frustration in ways that will make a positive change,” the Brown family said through its lawyers. “We respectfully ask that you please keep your protests peaceful. Answering violence with violence is not the appropriate reaction.”

The Brown family’s main mission moving forward is a campaign to have all officers wear cameras, as mentioned before.

For me, it was hard to grasp that Brown’s death was racially charged, as I am not usually exposed to instances of racial discrimination in Westport. However, the more research I did into the actual event and the grand jury who made the decision, the more I realized the cruel reality of the situation.

When I came to terms with the situation, I was able to understand the passion and fury of the protesters in a way I hadn’t before. However, the way that we, as a society, go about making this change needs to be careful and precise. I felt the Brown family’s call to action was particularly powerful:

Gerald Ford and Ferguson: why the grand jury made the right decision in not indicting Darren Wilson

Former President Gerald Ford may not be the first person to come to your mind when thinking of the events that have happened in Ferguson, Missouri. But his pardoning of Richard Nixon is the perfect comparison to what a grand jury did by not indicting office Darren Wilson in the killing of Michael Brown.

The slogan “Hands up, Don’t shoot” has taken on a life of its own. First used by rioters in Ferguson, Missouri, then by protesters in other parts of the country, including Seattle and New York City, it has even made appearances in the sports world as five St. Louis Rams players walked out onto the field with their arms raised.

Proponents of Michael Brown say that the 18 year-old teen had his hands up, signifying his surrender, when officer Darren Wilson shot and killed Brown.

But Wilson’s rendering of the events and the autopsy report say otherwise.

Forensic pathologist Judy Melinek reviewed the autopsy report for the St. Louis Post-Dispatch and came to the conclusion that Brown’s hands were not up when he was shot and killed by Wilson.

The trajectory of one of the shots shows that it hit the back of Brown’s forearm, meaning according to Melinek, Brown’s palms could not have been facing Wilson and therefore was not facing Wilson with his hands up in a sign of surrender.

The rioters in Ferguson, the protestors across the country and Rams players Stedman Bailey, Tavon Austin, Jared Cook, Chris Givens and Kenny Britt are uniting around a fallacy.

The autopsy report is frankly damning towards Brown’s supporters. In addition to evidence disproving the “Hands up” claim, according to St. Louis medical examiner Dr. Michael Graham evidence also “does support [Wilson’s claim] there was a significant altercation at the car.”

Under Missouri law, if Wilson had “reasonable belief” to use deadly force – that if he didn’t shoot Brown, Brown would’ve killed him – he had every right to do what he did.

About a month ago, three months after Brown’s death, I heard Watergate reporter Bob Woodward discuss an interview that he conducted with former President Ford. Upon Nixon’s resignation, Ford pardoned Nixon from any crime and, at the time, there was outrage over the pardon.

But Woodward spoke about how Ford believed the country wasn’t capable of dealing with Watergate anymore – that the best thing to do was put it behind us and move on.

If Wilson had gone to trial the conflicting witness testimony and an autopsy report that backs up many of Wilson’s claims would’ve made it very difficult for the prosecution.

As a country, the United States wouldn’t have been capable of dealing with the Michael Brown incident for longer. It would’ve taken months for the trial to begin and then the actual trial could’ve potentially taken an extended amount of time. Think about the unrest across the country leading up the grand jury’s decision to not indict Wilson and the riots that followed the announcement. Could the United States have taken more months of unrest and more riots?

We have a problem with race in this country. But instead of scapegoating a police officer who was simply trying to execute his job to the best of his abilities, we need to look at the whole picture, not just what occurred on Aug. 9 in Ferguson, Missouri.