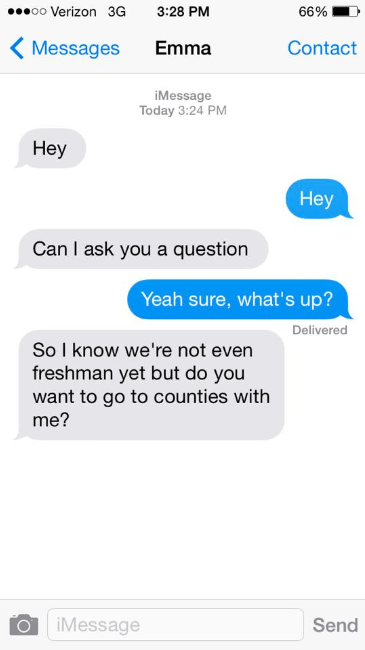 It all started in the first week of August, when I was frantically asked multiple times, “Julia, who are you taking to Counties?” In the midst of summer I had bigger things to worry about.

I had problems like if I should wear sunscreen at the beach or if it would be acceptable to have ice cream three times in one day.

However, the juniors of the past laid the foundation for us girls to reserve dates five months in advance. Now, I know I haven’t been through the Counties process, but I do know one thing’s for sure: this isn’t the way it always was.

There used to be surprise when it came to asking a date. That spirit of spontaneity is now lost with that one text that reads, “Hey, let’s go to Counties together,” followed months later by an anticipated bland poster that says, “(Insert Name Here), Counties?”

Back in the day, there wasn’t a lull of time for the relationship between the girl and her escort to become rocky or non-existent.

Couples today, however, disregard the risk of complete relationship turmoil. Within a five month span, a significant other could easily become an ex through a break-up shortly followed by a, “but we’re still going to Counties, right?” text with smiling and thumbs-up emojis to alleviate the awkwardness.

Eventually, I learned to accept that this is the way dances work these days, so I conformed and chose a date.

You could call me a hypocrite but I’ve just come to terms with the way we girls now make Counties an almost-half-year ordeal.

In the long run, this person you reserved months ago will only be as significant as the countless photo albums that will be cursorily scrolled over in Facebook feeds the next day.