Seniors have left Staples but… 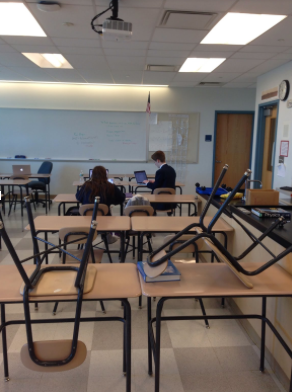 The ringing school bell is usually an unofficial signal to both students and teachers that in approximately thirty seconds, the infamous stragglers will come shuffling through the door.  This group of tardy-no-do-gooders are consistently seniors, with the occasional addition of a freshman trailing about a minute behind, making a ruckus by busting open the door, breathing heavily, and showering the front row of the class with their dripping, chlorinated hair.

But to generalize, this group of tardy students is always senior, and their peak mass is second semester.

Alas, the time of year has come when once the bell rings, class actually has to start because our source of entertainment and distraction has moved on to bigger and better things—arriving late to their internships.

Unfortunately, contrary to popular belief, life didn’t get much better once the seniors left.

Sure, the parking lot has cleared for juniors.

But, many of us have senior siblings (including myself) so they drive to their internship, while I’m stuck hitching a ride with my less-than-happy-dad.

Oh, and there’s also the illusion that the panini line has gotten shorter, or “not as dense” as optimist Colleen Bannon ’17 described it.

Let’s be realistic here people.  The brutal truth is that it really isn’t, all the seniors had their sandwiches pre-ordered, or they cut, so they never waited in the line in the first place.

The classes did get smaller; I can’t rebut that.

But, now the juniors don’t have the distraction of watching the senior boys get reprimanded by our teacher for claiming they,  “could’ve sworn we were on Schoology”, when actually they were on scrolling through their Facebook newsfeed. I must admit, their defense was solid, they made the argument that both have blue banners, very valid.

So, if you’re stressed out because life hasn’t changed now that the seniors are gone, don’t worry, it’ll get better, because finals are just around the corner.