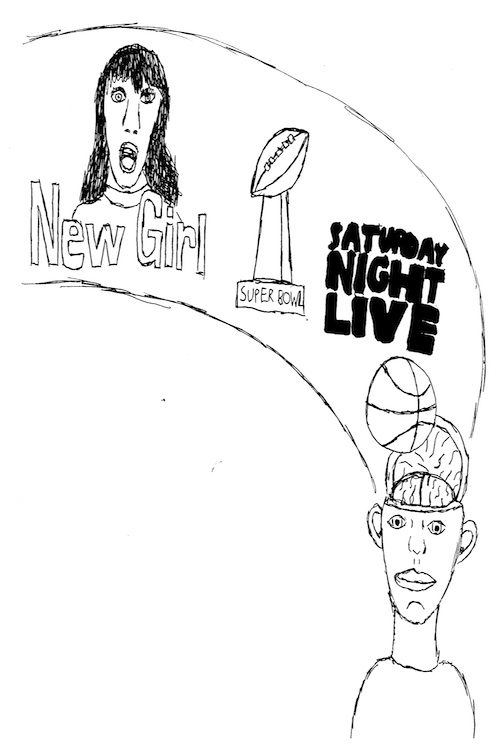 So, to write this article, I had to google “March Madness,” and, even still, I can tell you more digits of pi than I can March Madness teams.

But, if you’re like me and want to seem like you get pop culture, I’ll let you in on a few tips I’ve found over my 16 years.

You see that kid wearing a Louisville Cardinals jersey, walking in front of you in the hall? He gets pop culture, obviously. You know it’s true because he’s wearing a jersey that shows his loyalty to a sports team. You want to appear like that kid.

So, order a bunch of Cardinals paraphernalia off Amazon.com, and, the next day at school, it’s the first day that you get pop culture. All sorts of new people come up to you, wanting to talk sports with none other than you.

But then you run into a problem: you don’t actually get sports. So, what do you do when these people come up to you wanting to talk about Rick Pitino’s legacy (whoever the heck Rick Pitino is)?

Change the Topic of the Conversation

“It’s annoying that Louisville won because they shouldn’t have beat Wichita State,” says one of your new pop culture-oriented friends.

Now you say, “I’m glad Louisville won. Can’t you see my hat? Anyway, isn’t it a really nice day out?”

He responds, “Sure, it’s fine out, I guess. But, actually, why do you like Louisville? There’s no way they should’ve won.”

Uh oh. Stubborn guy. Changing the topic of the conversation isn’t going to work. In that case, there’s another thing to try.

It’s like my boy Abe Lincoln once said, “Better to remain silent and be thought a fool than to speak and remove all doubt.”

That can work a lot of the time, especially if you’re talking about TV shows.

“What’d you think of last night’s episode of SNL?”

“Well, Kenan Thompson …” and now is your opportunity to zone out. Just a couple “yeah”s here and there and one “definitely” and you’re golden.

Use Google and Wikipedia A Lot

I’ll just put it out there: I don’t watch the Super Bowl. Don’t gasp.

Here’s what I did last time: after the Super Bowl, I looked up who won and who lost on Wikipedia. Worked like a charm. Any question about pop culture you have can invariably be answered by Wikipedia or Google.

There is just one downside to this: it does take some time, and the point of these tips is to teach you how to seem like you get pop culture without you actually having to put any effort into it. Still, it takes less time than the normal method of actually watching the Super Bowl.

But, if you really don’t want to have to put any effort into this, there is one last option.

Really. It’s fine. I mostly don’t follow any of these tips. I just accept that I don’t know anything and that I really don’t care. And you can do that too.

Come on, accept the truth. You honestly couldn’t care less that you don’t know who Zooey Deschanel is. Join the club. We have T-shirts.