We’re Not in Jerusalem Anymore 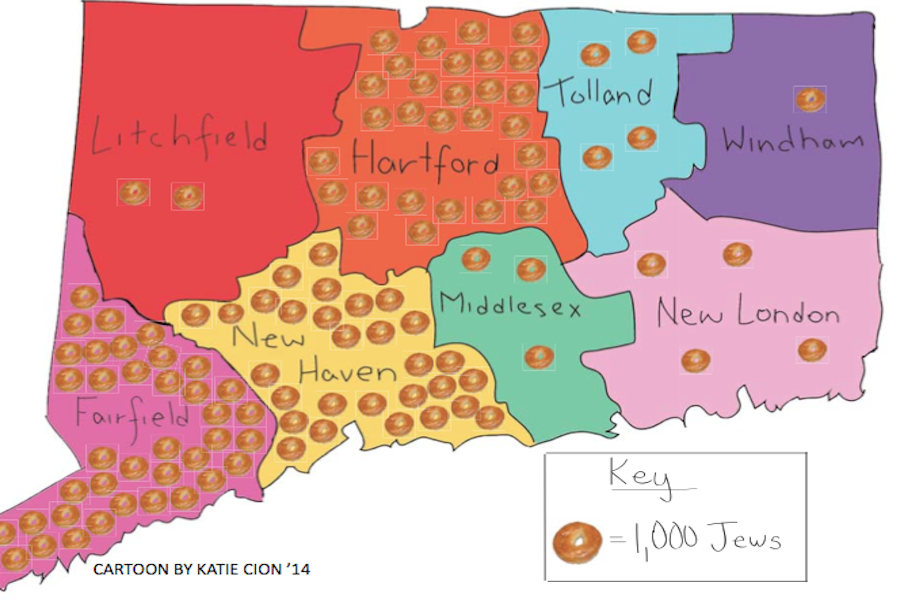 Ever since I was younger, I was told how few Jews there are.

It’s a fact: Jewish people are a minority, making up about 2 percent of the population in the U.S. But, despite the facts and the statistics, I never believed  that this was true.

I grew up in Westport, a place where being Jewish often feels like being part of the majority. Even though Jews only make up about 30 percent of the Westport population, Jewish people don’t feel out of place. Being Jewish at Staples seems just as normal as being a Christian at church. And, luckily for me, I feel accepted and welcomed at school every day. Unfortunately, that’s unusual.

My mom grew up in Laurel, MD, and she was one of the only Jewish people in her school. She has told me countless stories of how weird it was to be Jewish at her school. Of course, since scarcely anyone shared her religion, her school did not get days off for the Jewish holidays. My mom would have to bring in a note telling her teacher why she wasn’t in school, and the teacher still wouldn’t understand because she had never heard of any of the holidays.

At Staples we get Jewish holidays off. In fact, I’m so spoiled that I was upset when we didn’t get Passover off, while at other schools similar to my mom’s, Jewish holidays aren’t even recognized.

When my mom was younger, she was embarrassed to have a Bat Mitzvah because she knew that she would have to explain what it was to all her friends. She didn’t grow up in a place where seventh grade was another word for the year when everyone wore sweatshirts on Mondays. And when she told me this, I was reminded that most people didn’t grow up the same way that I did.

My dad also went to school, in a small town in Long Island, where he was one of the only Jewish students. To my dad, it didn’t really affect him because he actually hid the fact that he was Jewish. He made sure that no one knew that he was Jewish because he didn’t want to get beaten up.

I can’t imagine being embarrassed or feeling the need to hide my religion. I feel like everyday I somehow admit to my Judaism, whether it’s talking about what I want for Hanukkah or having challah for lunch: somehow the secret gets out.

I can’t even imagine someone saying that to me. Here in Westport, I feel like all of the religions mix; I go to my friends’ houses for Christmas, and they come over for Passover Seder. We are, for the most part, extremely accepting of the differences in our cultures and religions.

That girl who asked her roommate about the myth regarding Jews having tails must have grown up in an area where Jewish people just didn’t exist. Or if they did, they were hidden and embarrassed about their religion, similar to how my dad was. I can’t imagine being one of those kids.

At Staples I am really lucky. I have not gone to school once feeling like my religion would somehow separate me from the other students. Although my teachers, for the most part, aren’t Jewish, they are all really understanding of my circumstance and will willingly give me some leeway regarding homework or tests assigned during the Jewish holidays.

Being a Jewish student at Staples is clearly a different experience from most schools in the country. While I feel like the majority at my school, others have to hide their religion in order to not be beat up or misunderstood.

One thing that I learned about religion in regard to Staples is that it is one of the only factors where people don’t feel the need to conform to the majority. For the most part, all are accepted because we all abide by the belief that there are many religions and no one is superior to the other. At Staples, the minority doesn’t feel so small.