Never Too Old To Trick or Treat 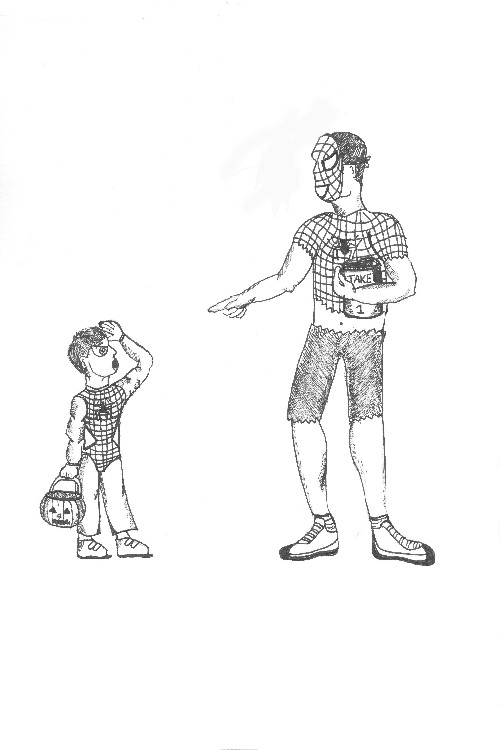 Trick or treat smell my feet. Give me something good to eat. If you don’t I don’t care, I’ll pull down your underwear.

Don’t you miss it?

Hearing that nostalgic phrase is something that still reminds me of exciting moments from my childhood which can be attributed to only one holiday, Halloween.

Do you remember when you were first told about it? You got to go around to every house on the block, and they had to give you candy. All you had to do was dress up as a superhero.

It sounds almost too good to be true.

And it’s such a small price to pay for such a great reward. You don’t even have to bribe me to dress up as a superhero. If it were acceptable, I would do it everyday.

I remember walking down my street inCalifornianot even questioning the fact that I was dressed up as a masked ninja. All I knew was that if I did it, I got candy.

And picking out Halloween costumes has to be one of the most fun activities in the world. Think back to when you were searching for the right one.

There were the scary ghost, ghoul, zombie, and Dick Cheney costumes. Then there were the hilarious sumo wrestler, Stewie from Family Guy, and Charlie Sheen costumes.

But you have to pick the right one.

Every kid knows the better costume you have, the better chance there is you get two pieces of candy instead of one. And that extra piece of candy might as well be the difference between life and death.

That is the adrenaline-filled goal of Halloween. Get as much candy as possible by any means necessary. “When people left out buckets of candy saying take one, I took the whole bucket,” recalls Spencer Carr ’13.

That may be a little rude. But I can’t blame him.

Candy is everything as a kid.

The only reason people pretend it isn’t a big deal now is because they think they are “too old.” Well, let me clue those people in: you are never too old to trick or treat.

Why would you think others would look down on you for having the time of your life? Why would you give into peer pressure and try to forget the joy of Halloween?

I would much rather spend a night sinking my teeth into sweet Hershey’s chocolate than watch girls act drunk in revealing costumes.

And trying to justify not going trick or treating because you are going to a party is no excuse. No party has ever been able to outdo Halloween.

Have you ever been at a party that has taken up an entire block? Has a party of yours ever stopped traffic? Ever attended a party that the cops don’t even try to stop?

I didn’t think so. So, let me give you a little advice. Put the beer down and go pick up a costume.

Every explanation teenagers use for not trick or treating can be easily thwarted.

The only somewhat reasonable excuse is Devon Lowman’s, who says, “I’m too busy oiling my abs.” In which case, I understand. You have to keep the girls happy.

But other than that rare scenario, I expect to see all of you out and about next Halloween.

I’m sorry but it needs to be said; Halloween is a joyous time that is forgotten with age.

Maybe that is why kids are always so happy and adults are always walking around hunched over with a scowl on their face. Did that ever occur to people?

It’s just a theory, but I think I’m onto something here.

So if you are ever feeling downtrodden, sad, or stressed, and you need to have a good time, just remember one thing. You are never too old to trick or treat.