Has This Flame Burned Out? 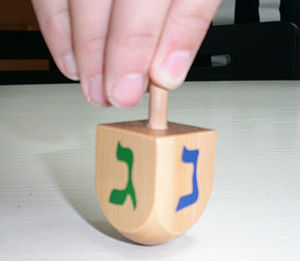 When it’s the holiday season, being Jewish rocks.

There’s something very thrilling, almost dangerous in a way, about going out for Chinese food on Christmas Eve and being the only house on my street that’s not draped with copious amounts of colorful lights. Just deviating from the norm.

What’s especially awesome is getting 8 presents in one week during Hanukkah.

However, the other aspects of Hanukkah, like playing with a wooden, 4-sided spinning top and lighting a candle a night, no longer give me as much of a thrill as they did when I was younger, and it’s depressing.

Don’t get me wrong; I love Hanukkah. It’s one of the only Jewish holidays where I’m not starving myself or sitting in synagogue for 4 hours. I should probably say that the story is so touching as well. Despite this, I realized after this year’s Hanukkah that I just don’t find it as much fun as I did when I was a kid.

For example, when I was younger, my cousins and grandparents would come to my house every Hanukkah. We would eat enormous latkes for dinner, and my cousins and I would dump pounds of candy on the floor and spin the dreidel for hours.

Now my brother is preparing for college, my cousins are in grad school, and no one wants to play dreidel anymore. Except me, which sucks. One is the loneliest number when playing dreidel.

Plus, this year, Hanukkah just didn’t turn out the way I wanted it to. It started out when I went to my synagogue’s Hanukkah boutique and was literally beside myself with joy when I found Jewish silly bandz, called Jewlybandz, and they were Hanukkah themed.

Much to my dismay, when I got home and opened the pack, which I paid $7 for, five out of the six different shapes were fit for someone with a wrist the size of a head.

I was so excited to eat latkes that I had been eating them since mid-November. They are quite possibly my favorite food. However, when Hanukkah actually started, my family somehow forgot to get latkes, so we ended up eating frozen latkes that tasted like a combination of vomit, candle wax, and just a bit of potatoes.

Never have I been so horrified by a latke.

And finally, lighting the candles. This year, I got lucky enough to be elected to light the candles each night… But only because no one else wanted to.

Does no one have Hanukkah spirit anymore?

Yes, it may possibly be one of the least important Jewish holidays, and yes, I haven’t been doing much to keep the flame of Hanukkah spirit alive myself (pardon the pun), but it seems to me as though Hanukkah has lost its magic.