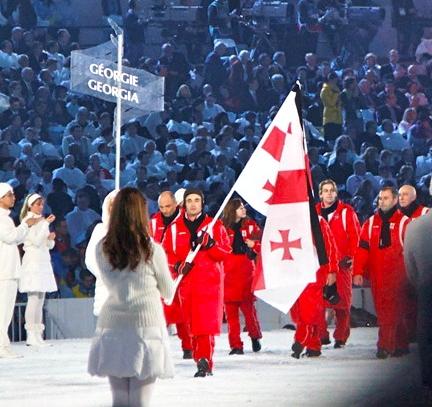 Nodar Kumaritashvili (above holding flag) was an admirable member of the Georgian Olympic team | Photo by s.yume

I was sitting on the couch, harmlessly translating some Spanish vocabulary words on my laptop, while the 7:30 p.m. Olympic coverage was on in the background. It was the first day of the 2010 Winter Olympics and my family was excitedly awaiting the first report of the events.

Unable to multitask sufficiently, I could only tune into bits of the coverage, and when I heard something along the lines of “this clip may be tough for some to watch”, I looked up from the computer screen.

I watched a man die.

21-year-old Georgian luger, Nodar Kumaritashvil, was positioned at the top of the luge awaiting his event. Then the screen cut to an image of Kumaritashvil shooting out from his sled and striking a steal pillar, in slow motion.

The coverage didn’t stop there, it was followed by a replay of the accident, and then a still image of him receiving CPR; although they made sure to add that Kumaritashvil was dead before they attempted to resuscitate him.

I sat stunned starting at the screen.

In my life I have made a concerted effort to avoid watching real images of people losing their lives, and I had accidently watched an athlete die on the 7:30 news.  What was more shocking was the realization that I wasn’t watching a live broadcast; the network purposely chose to show the footage.

The issue is, was this necessary news coverage or sensationalistic media run amuck?

The network was certainly correct in reporting the athlete’s untimely death and the dangerous condition of the luge track, but I can’t believe it was necessary to broadcast his death and the failed attempt to revive him.

Just because we can capture everything on tape doesn’t mean we need to see everything. After I watched the horrific event my mind immediately went to Kumaritashvil’s family. Would they really want the entire world seeing their son, brother, cousin, nephew dying? Technological capabilities should not outweigh peoples’ rights to privacy.

Furthermore, the entire idea of showing death on television at 7:30 p.m. appalled me. Despite the fact that NBC News anchor Brian Williams had provided a warning -which I hadn’t heard – it struck me as not only disrespectful but almost trivializing to air the young man’s death.

Even Saddam Hussein’s newsworthy execution was not televised. An outcry arose after an unauthorized cell phone recording of the execution was released on the Internet, but it was still not aired on the nightly news.

If a criminal’s privacy in his last moments are protected, why isn’t an Olympic athlete’s death due the same respect?