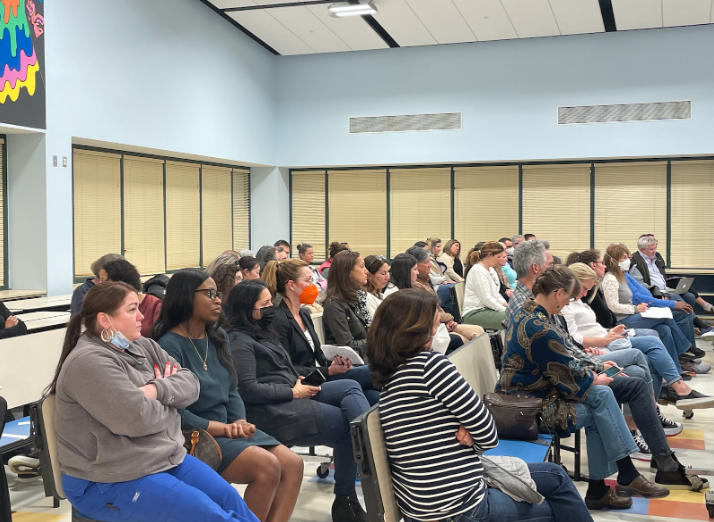 Westport parents, educators and residents attended the Board of Education meeting Monday night, contributing to conversations about the equity study on the climate of Westport district schools.

The Westport Board of Education began discussions Monday on the results of a climate and equity report done on Westport schools in consultation with the New York University Steinhardt Metropolitan Center.

The report spanned the study of issues in the system including concerns with diversity,  inclusion and equity, and contained student anecdotes that were used in the evaluations for the study.

During the public comment portion of the board meeting in which spectators have the option to ask questions or make a comment, several Westporters took the opportunity to voice concerns or praises they held about the program, with viewpoints from both sides of the discussion voiced in the report.

“Socialist ideas such as equity of outcomes are the modern version of tyranny,” Camilo Riano, a Westport father, said in his comment, “where no man can use logic and reason to solve the problems faced by the individual or society, but has to surrender his thoughts to the oppression of anti-racist theories.”

Lee Goldstein, the board chair, had to restrict applause and jeering that occurred, which are not allowed at the board meetings. Other parents supported the release of the survey and praised its presentation to the town’s members.

“I applaud our Board of Education and all of its hard work, and everybody that has contributed to the progress that is being made,” Michelle Mechanic, mother of both a special-education learner and a typical learner, and Vice-Chairwoman of the Democratic town committee, said. “I think the service of our children, [and] the collaboration of this board and our community together is a wonderful thing. We can always be better.”

Some parents expressed irritation, such as Executive Director of the Westport Museum for History and Culture Ramin Ganeshram, who left the meeting feeling that the conversation was not beneficial due to the deeply contrasting viewpoints that different members of the meeting held.

“In order to have a productive discussion, everybody has to have a relatively equal understanding of the topic, and all the precursors to that topic,” Ganeshram said. “We have woeful inequity in that room in terms of understanding the history that’s brought us here, the town’s history [and] America’s history that has brought us here. And so you cannot have a productive discussion.”

While conversations involving race and minority hiring were prominent during the presentation of the study results, the competitive nature of the Westport school district, specifically the combative culture between students at Staples High School was also a main focus.

“In the actual physical classrooms and arenas that we’re looking at,” Principal Stafford W. Thomas Jr. said, “the number one point that came across, certainly for the high school, was how competitive the school is, and the mental stress and anguish that goes along with being in a competitive school in this state, in this country.”

While the meeting prompted discussion that caused heightened emotions, Mechanic ultimately felt that the conversations will advance and improve the education system of this district.

“The way we’ve made the progress that we’ve gotten so far in America- and we’re nowhere near there- is by confronting these uncomfortable facts,” Mechanic said. “It’s uncomfortable, and it’s scary for a lot of people, and I think that the people that are showing resistance are scared.”