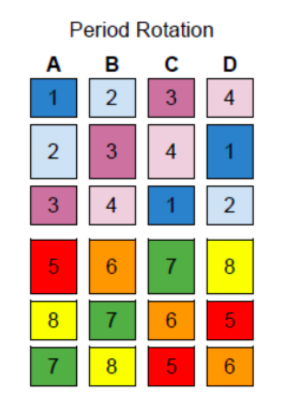 The schedule for the 2021-22 school year has been announced as returning to the six-period day schedule Staples had before the pandemic.

The Staples school day schedule for the 2021-22 school year is set to change back to the six-period a day model that was used pre-pandemic, rather than using the current four-block model.

When planning next year’s schedule, Principal Stafford W. Thomas Jr. and other members of the Staples administration considered implementing aspects of the current class structure..

“We certainly looked into pieces of the 4×4 block schedule and other items we liked this year from the current schedule,” Thomas said. “But no changes were ultimately made to adopt a new schedule.”

Some students have expressed a mix of emotions towards changing back to the former six-period model after experiencing the current four-day model for an entire school year.

“I think next year’s workload outside of school will be more stressful with the increase in the daily number of classes.” Ali Chodash ’23 said. “But overall, I’m happy that I won’t have to take notes for 80 minutes anymore.”

With the re-implementation of the six-period schedule, there have been some suggestions of a possible change in the future. Before COVID-19 struck, the administration had already sought the idea of modifying the schedule, and their plans are on track to be rolling out one year later than expected.

“The plan is now to return to last year’s six-period schedule and evaluate it next year,” Thomas said. “Then bring a scheduling committee together to look at a possible new schedule for the 22-23 school year.”