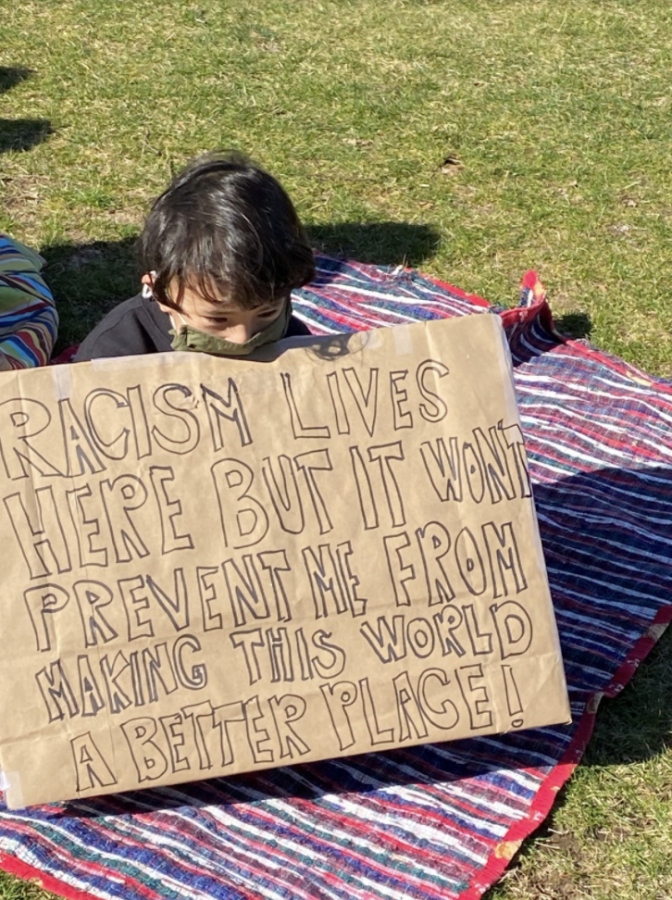 Westport citizens gathered at Jesup Green on March 27 to show their support for Asian Americans, who have been suffering from increased levels of violence and abuse in recent weeks.

Community leaders and Westport residents assembled on March 27 at Jesup Green to protest Asian American hate and honor the memory of lives lost in the Atlanta shootings on March 16  and other incidents  of violence against Asian Americans.

“Going to the rally was a very powerful experience for me,” Mia Vindiola ’23 said. “I also think that the statements Marpe and Scarice released are important to bettering our community and being more aware of racism in Westport.”

Other notable figures in the Westport community have expressed similar feelings, including Superintendent Thomas Scarice who addressed the racism directed toward Asian Americans in a separate statement released on March 22.

“The Westport Public Schools stands with all communities in denouncing all forms of violence, racism, and xenophobia,” Scarice wrote. “The commitment of our district is to embrace and respect all people, while creating inclusive school environments where all students and adults feel a strong sense of belonging, affiliation, and connection.”

Marpe reflected upon his own support of diversity in the Westport community and called upon residents to evaluate their attitudes in an online public statement.

“An attack on any is an attack on all that we hold dear as a community that embraces inclusiveness in how we govern, and in how we interact with our neighbors,” Marpe wrote. “We celebrate diversity in this community, and we do all that we are able to insure everyone, residents and workforce alike, feels safe, secure, and welcome in Westport.”

Violence, racial discrimination and general bigotry toward Asian Americans has risen with the COVID-19 pandemic, exemplified by the Atlanta shootings, in which six Asian women were killed at three different spas/massage parlors. According to the Stop Asian American and Pacific Islanders Hate group, there have been over 3,795 reported incidents of hate toward Asian Americans since the early days of the pandemic.

Marpe concluded his statement by assuring the approval of a resolution condemning Asian American hate on March 24 by the Board of Selectmen.

“Westport remains committed to condemning all manner of racism, stigmatization, hate speech, hate crimes, xenophobia, discrimination and violence,” the statement read. “Policies that embrace inclusivity, diversity, civil discourse, and acceptance for all, remain at the forefront of our intentions as a community to combat hate and racial injustices.”