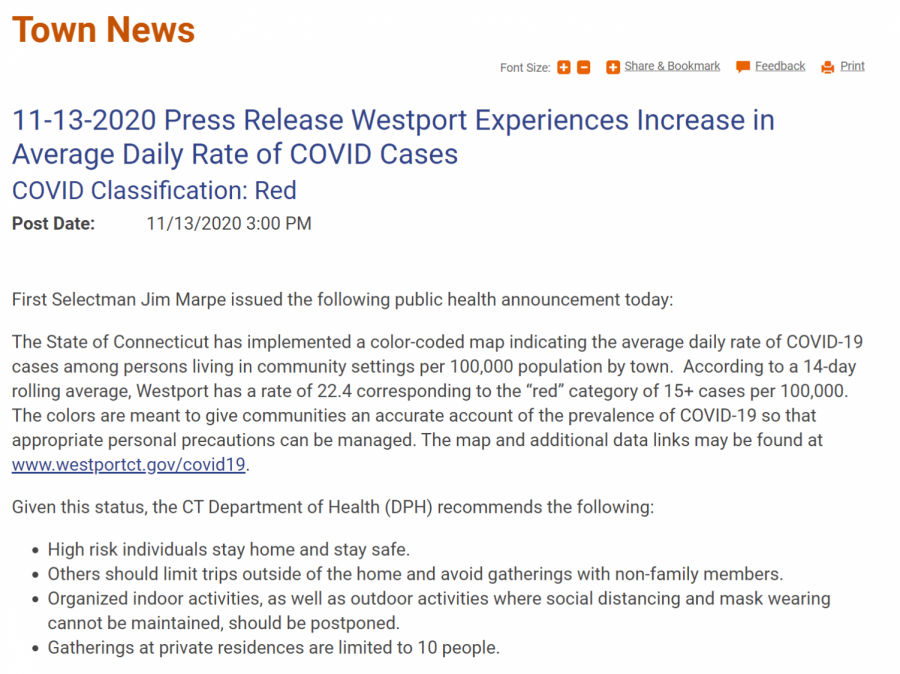 Westport became a “code red” town on the COVID-19 CT data map with the weekly number of cases increasing to 53 on Nov. 12.

“I remind everyone to follow the CDC guidance to social distance, limit gatherings, wear a face covering and practice good personal hygiene,” First Selectman Jim Marpe wrote in his Nov. 13 press release on the situation.

He wrote that Westport will continue to follow Phase 2.1 guidelines adopted when the town became orange. Marpe said residents should limit leaving the home and attending non-family gatherings, especially if they are high-risk, and that indoor events and non-distanced outdoor events should be postponed. Gatherings at private residences should not exceed 10 people.

The Parks and Recreation Department also suggested restrictions on outdoor activities in the press release, requesting that all non-family members wear masks when within six feet while at fields, parks, and beaches and that high-risk sports be discontinued. They have also taken away field permits (which allow fields to be taken out for private use) for the time being. The Compo skatepark and basketball courts will remain open as long as users follow guidelines, as will the Longshore Golf Course.

All neighboring towns to Westport are also code red. Westport has a higher rate of infection than Weston and Wilton, but maintains a lower rate than Norwalk and Fairfield.

This development came as Staples announced it would take up a full remote school schedule until Thanksgiving due to concern over contact tracing and an increase in COVID-19 cases in the school system.

James Dobin-Smith ’23 says he is concerned that the town is regressing to the state they were in during March 2020.

“But I think this time, we’re a little bit better prepared with this hybrid schedule,” Dobin-Smith said. “I think that, being as it accommodates both in-school and out-of-school students, it is able to accommodate going back to school fully or going home fully.”