We The People breaks records in unprecedented times 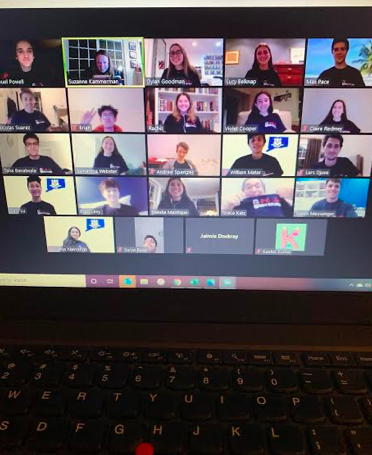 The We The People team discovered they had won their division over a Zoom call with teacher Suzanne Kammerman.

The We The People class placed fifth at the 2020 National Finals Challenge held from Saturday, April 25 to Sunday, April 26.

In addition to finishing the highest Staples High School has ever placed, the team also received the Division C award as the highest-scoring team from the Northeast. In light of the coronavirus pandemic, this year’s Nationals were held online rather than at the National Conference Center in Washington D.C.

The team discovered they had won their division over a Zoom call, while their exact national placement was sent out through email the next day.

“Every member of the team was ecstatic,” Samuel Powell ’21 said. “Having broken down the Trumbull High School dynasty at the state competition, placing so well at Nationals commanded a similar reaction.”

Rather than live announcement proceedings, most students found out their results via text.

“While all of that was amazing, it is so hard that we can’t celebrate as a team together in person,” We The People teacher Suzanne Kammerman said. “It’s just not the same as being in the room with each other.”

The Nationals competition heavily depended on the usage of technology this year. Traditionally, the competition format mimics a congressional hearing with students first testifying their responses and later responding to constitutional questions the judges may ask.

“I think the Center for Civic Education did a really great job pulling it together,” Kammerman said. “There wasn’t a single technology glitch and the whole competition went off seamlessly from our end.”

However, the major drawbacks to the online arrangement were that students could not watch their teammates compete in real-time, nor did they have the opportunity to show judges what they were capable of in person over multiple days.

“I was just as nervous as States, despite me staring at pixels rather than humans,” Samuel Powell ’21 said.

Another one of the downfalls of this year’s online competition was that students were not able to experience their class trip to Washington DC.

“In many ways, the trip to D.C. to the national competition is the prize for winning the state competition,” Kammerman said. “Five days in D.C. exploring the city with your friends is such a memorable experience.”

We The People students in past years visited historical areas such as the Lincoln Memorial and Washington Monument, but also more modern buildings such as the Newseum and the National Portrait Gallery.

“[I missed] not only visiting the famous landmarks and monuments but just becoming immersed with all of the political life that DC embodies as the nation’s capital,” Powell said.

Even though preparation moved completely online, the class was able to take this unprecedented situation to strengthen their collaboration through constant FaceTime and Zoom calls.

“Dylan Goodman’s mother also made t-shirts for the students,” Kammerman said. “Students picked them up at her house and we wore them while watching the awards assembly together.”

While this year’s We The People class may not have received the full experience of the National Finals competition, this did not stop them from performing to the best of their abilities.

“They put in countless hours of research and preparation while also adapting to this new distance learning platform,” Kammerman said. “I am just amazed at their determination and resilience.

As students look towards next year, they wish to take their knowledge of American democracy and understanding of teamwork to guide the new We The People team.

“Simply, this class is like no other,” Powell said. “The comradery and the competition is seemingly exclusive to this class. I will cherish the work and the memories as I hope to mentor future generations of We The People members to achieve and advance past our prior success.”