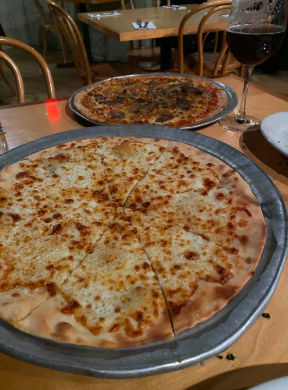 Fat Cat Pizza Company will be closing down on Feb. 19. The restaurant was known for their thin crust pizzas and the myriad of pizza toppings that were offered.

Fat Cat Pizza Company in Norwalk will shut its doors on Feb. 19, after 16 years of operation, because the building that they rent was sold. The closing was announced in a Facebook post on Feb. 10.

Owners Mark Ancona, Anthony Ancona and Suzanne Ancona opened the restaurant originally to be a place where people could enjoy good food in a casual setting.

“It was a delicious, community hub,” general manager Suzanna Ancona said.  “It was a great gathering place for families and everybody alike.”

While they had the opportunity to buy the building, they felt as though they had been in the building for so long that they wanted to try something new.

“It felt like it was the right thing to do for us because we had been here for so long already,” Ancona said.  “We’ve worked a lot in 16 years. It will be fun to work on some other stuff for awhile.”

The restaurant was a popular destination for Staples students because of the different types of food they offered.

“I’m very sad about it,” Leni Lemcke ’22 said. “My personal favorite was the kale salad, [but] all their food was really good.”

However, some students, like Lili Aldridge ’22, think that it was time for Fat Cat to close, as Westport restaurants have evolved to offer more options.

“Ever since I was really little, my family would go to Fat Cat once every single week,” Aldridge said. “When I was younger we went to Fat Cat because there weren’t all of these amazing restaurants in Westport like we have now […] We have such better local restaurants now than we did five years ago.”

Nonetheless, Ancona believes that there may be a future for Fat Cat.  “It has to be the right next phase for us,” Ancona said. “I wouldn’t close myself off to anything.”