Kings Highway Elementary bus crashes with children on board 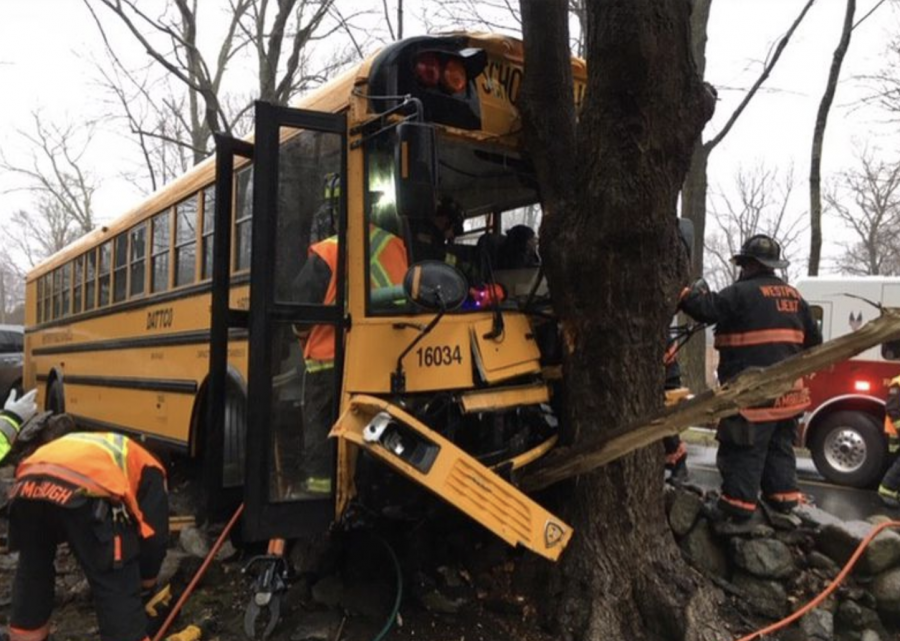 First responders attend to a bus that crashed into a tree and stone wall while carrying over 20 elementary schoolers. Several of the kids sustained minor injuries, though none had to be hospitalized. The driver was injured and taken to Norwalk Hospital by EMS.

A school bus with over 20 students on board veered off Sylvan Road North, striking a traffic sign, stone wall and a tree while en route to Kings Highway Elementary School at 8:15 a.m. on Feb 7.

Several of the students sustained minor injuries; however, none required transport to a hospital. The driver was extracted from the vehicle and was taken to Norwalk Hospital due to non-life threatening injuries.

The cause of the crash remains unknown and is being investigated by the Westport Police Department.

“Members of the Westport Police Department’s detective bureau and accident investigation team are on scene conducting an investigation into the incident,” the police department’s press release read.

The police have been working with the Board of Education, Westport Public Schools administration and the school bus service, Dattco, to help those involved.

“At the time of the accident,” the press release stated, “members of the police department immediately began coordinating with the Westport Board of Education to facilitate prompt notification to affected parents as well reunification with their children.”

All of the elementary schoolers involved in the accident were released to their parents.

Superintendent of Westport Schools, Dr. David Abbey, thanked the first responders and Kings Highway Principal Dr. Mary Lou DiBella for their quick action after the accident in an email sent to Westport families.

“We wish to thank the Westport and Norwalk first responders for their swift and caring response to the accident,” Abbey’s email stated. “Their efforts, in coordination with Dr. Mary Lou DiBella, Principal of Kings Highway Elementary School, who arrived on scene shortly after the accident, provided the necessary support for students and families.”