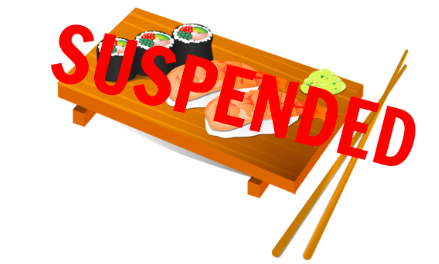 Matsu Sushi is one of many sushi restaurants in Westport, but has faced numerous closures over the past year.

Matsu sushi closed temporarily due to the suspension of their Sales and Use tax permit on Oct 11.

The permit was suspended due to violations such as a discrepancy in the sales tax remittance from years past, according to WestportNow.

Many Staples students are no longer customers of the business due to the constant closings and accusations made against them by their employees.

“I don’t ever go to Matsu anymore because I never know if it’s open,” Shannon Conte ’21 said. “I also don’t really feel comfortable going there because of their history with their workers.”

The restaurant states that these discrepancies are caused by frequent closings over the past year.

In April, Matsu Sushi closed unexpectedly due to renovations. Additionally, the restaurant has had a tumultuous relationship with its workers, who went on strike in February due to a variety of reasons including excessive work hours, according to Dan Woog.

Matsu Sushi was also forced to reinstate two employees who won a lawsuit against the restaurant over its failure to provide minimum and overtime wages.

All businesses who intend to sell goods in Connecticut are required to have a Sales Tax Permit in order to operate their business, according to the Connecticut Department of Revenue Services. Matsu must have their permit reinstated before reopening.