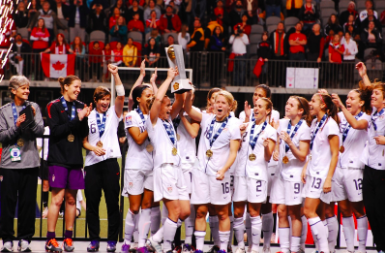 The 28 members of the team filed the class-action lawsuit in a federal court in Los Angeles under the Equal Pay Act and Title VII of the Civil Rights Act.

“The Women’s Team is very successful, more so than the Men’s Team, which should 100 percent guarantee them at least equal pay, if not more,” Josh Buckman ’19 said.

The Women’s Team has won the World Cup three times and the Olympics four times whereas the Men’s Team has yet to win a world title and did not qualify for the most recent World Cup in 2018.

“The [players’] commitment to [the Women’s Team] clearly pays off in all their performances,” Emmy Bassler ’21 said. “Their natural talent is also insane which shows in their results.”

The players take pride in their success. Through their fame, the team aims to fight for equality.

“Each of us is extremely proud to wear the United States jersey, and we also take seriously the responsibility that comes with that,” Alex Morgan, Women’s Team member, said in a prepared statement to The Associated Press. “We believe that fighting for gender equality in sports is a part of that responsibility. As players, we deserved to be paid equally for our work, regardless of our gender.”

In the past, the team filed a 2016 complaint with the federal Equal Employment Opportunity Commission to recieve equal pay since the Men’s Team earned far more with oftentimes lesser work performances.

“I think to be on this team is to understand these issues,” Megan Rapinoe, Women’s Team player, said in an interview with The New York Times. “And I think we’ve always, dating back to forever, been a team that stood up for itself and fought hard for what it felt it deserved and tried to leave the game in a better place.”

The 2016 complaint resulted in pay raises and bonuses, including better travel provisions and accommodations.

“I’m unfortunately not too surprised that this is still an ongoing issue for their team,” Cailyn Lesher ’20, Staples girls’ soccer team player, said. “Hopefully this time there will be lasting, impactful changes.”

While the U.S. Women’s National Team Players Association is not affiliated with the lawsuit, they “support the plaintiffs’ goal of eliminating gender-based discrimination by U.S. Soccer Federation,” according to a public statement.

“An equal division of revenue attributable to the Men’s National Team and Women’s National Team programs is our primary pursuit as we engage with the U.S. Soccer Federation in collective bargaining,” said the Men’s Team in a released statement. “We wait on U.S. Soccer to respond to both players associations with a way to move forward with fair and equal compensation for all U.S. soccer players.”