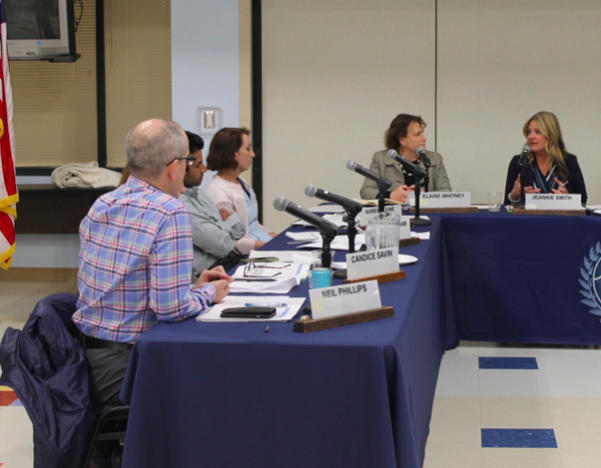 Board of Education Vice Chair Jeannie Smith voices her sentiments to BoE members about the proposals of creating a new purpose for Coleytown Middle School.

The Board of Education (BoE) met to discuss improvements for Coleytown Middle School and propose possible redistricting for the Westport school system on Monday, April 1.

The Board of Education’s (BoE) goal is to achieve a balance of enrollment.  According to BoE secretary Elaine Whitney equality of enrollment would “provide students with equal opportunities.”

To achieve a balance, the group discussed four possible solutions that would help add more students to Coleytown Middle School.

The first scenario would be for all Coleytown students to return to their school, with no changes being made. In the past, there were two teams per grade. The teams separated students into groups and each team would have a designated set of teachers that all students in that team would share. However, given Coleytown’s reduced enrollment, there would not be enough students to have two teams. So, if no changes to enrollment are made, there would only be one section of students per grade level.

The second solution to Coleytown’s decreased enrollment would be to redistrict.  According to the Board, redistricting is the only way to both increase enrollment and create two teams at each grade level.

A third solution would require a grade six academy at Coleytown Middle School, that would move all seventh and eighth graders to Bedford Middle. Moving the sixth grade academy to Coleytown would result in an occupancy of between 400 and 450 and fill only two thirds of the school’s available capacity. The Board acknowledged that while this would lead to an easier transition for students, it would be more difficult for bus scheduling.

Assistant Superintendent for Pupil Services Tina Mannarino, said she visited a sixth grade academy and noted that the academy helped to act as a transition school for students. “They really support kids during a critical time in their natural environment,” she said.

The fourth and final proposal would be to create an academy for both fifth and sixth graders. The Board stated the fifth and sixth academy might result in a smoother transition from elementary to middle school, but also recognized that doing so would require that an addition be added to the Coleytown building. There would also be a reduction in the enrollment in Westport’s elementary schools.

The Board discussed making changes to the main entrance to improve security. The gymnasium is in need of air conditioning, new floors and exit doors, and a new mechanical wall to divide the two sides of the gym. All of these were discussed at the meeting

The Board also heard requests for a redesign of the library and media space in order to create more flexibility of use, including  forming a video production center, adding a standing workplace and implementing a projection system.

Other areas that may be updated are science labs, music rooms, the theater area, the art rooms, and the STEM space.

Selectwoman Melissa Kane believes the improvement fund could be better spent, saying “I think that we should look at this differently.”

Robert Harrington, parent of a Staples student, said all Coleytown improvement proposals were excellent, and praised the Board’s work. “I feel so relieved and confident of the process that is now in place,” he said, “We could have a Coleytown Middle School that we’re not only happy with, but we’re proud of.”

The Coleytown building committee plans to meet on Thursday to discuss the improvements in greater detail.