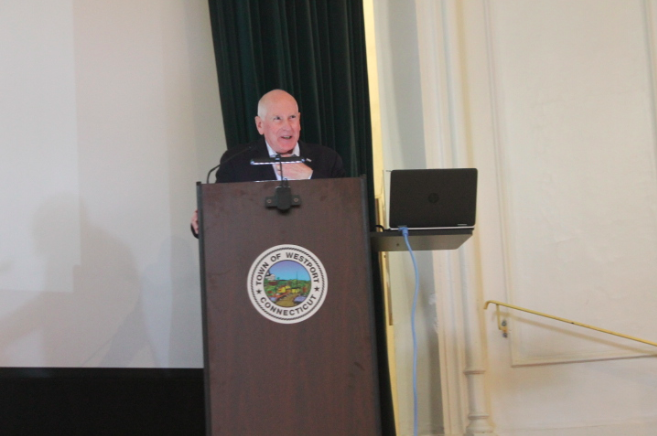 Earlier last year, First Selectman Jim Marpe spoke during the State of the Town Meeting on Feb. 10, expressing positivity in the overall condition of town and schools.

First Selectman Jim Marpe spoke at the State of the Town meeting on Feb. 10 at the Town Hall to discuss fiscal challenges, multi-family housing developments and Coleytown Middle School (CMS), among other topics.

Westport’s State of The Town meeting presented residents with an update on the town’s progress over the past year and gave them the opportunity to ask questions. It was announced that Staples will no longer house CMS eighth graders and that all sixth through eighth-grade students will go to Bedford. The Representative Town Meeting appropriated one million dollars for the installation of six portable classrooms in August.

“I’m pleased that we’re now at the point where there’s some degree of certainty as we move forward because I know that’s been one of the frustrations over the last few months,” Marpe said.

Repair of CMS is the long-term plan, which Public Works and building officials are already working towards, with hopes that the school will be reoccupied by the fall of 2020.

The “Tools for Schools” committee was pioneered as a system to immediately report any building issues at the various Westport Schools and to prevent a repeat of the CMS mold problem.

“We are demonstrating not only to our students and town, but to the rest of the world that we are a town that when something comes up, we will tackle it, as a town, as a community, and we will be better as a result,” Mathias said, emphasizing how the CMS mold issues didn’t impact the BOE’s commitment to enhancing students’ education and environment.

Solar panels are planned to be installed in Staples as part of a continuing partnership with the Westport Green Initiative.  The end goal is to become a “net zero” Carbon emissions town. The BOE is also constantly seeking out new course opportunities to align the curriculum offered with the needs of every student.

Mathias also referenced the schools’ progress over the past year, including accolades such as Staples’ ranking as the top high school in Connecticut by Niche and having the highest average SAT score in the state.

But according to Marpe, with the state’s proposed regionalization of school districts with 20,000 or fewer residents, Staples’ future may not be as transparent as one may think. Marpe communicated uncertainty over the proposal and underscored the need for caution if it became mandated for our town.

“Westport has set the bar for world-class school systems throughout the nation, and I’m concerned about the possibility of combining [with another district…] I think we have a lot to lose as to the quality and attractiveness of our community,” Marpe said.

A more current perturbation is the lack of predictability and sufficiency in state funding for education. Marpe advised town legislators to limit the introduction of mandates to unfunded municipalities.

Despite these deterrents, Marpe expressed optimism about the town’s condition and what is to come.

“I’m confident about where we are as a town and where we’re going in the future because I know that all of us: our schools, families, elected and appointed officials; our town employees; our businesses; and every volunteer who contributes to the success of our town, are fully engaged and committed to making Westport the very best it can be,” he said.