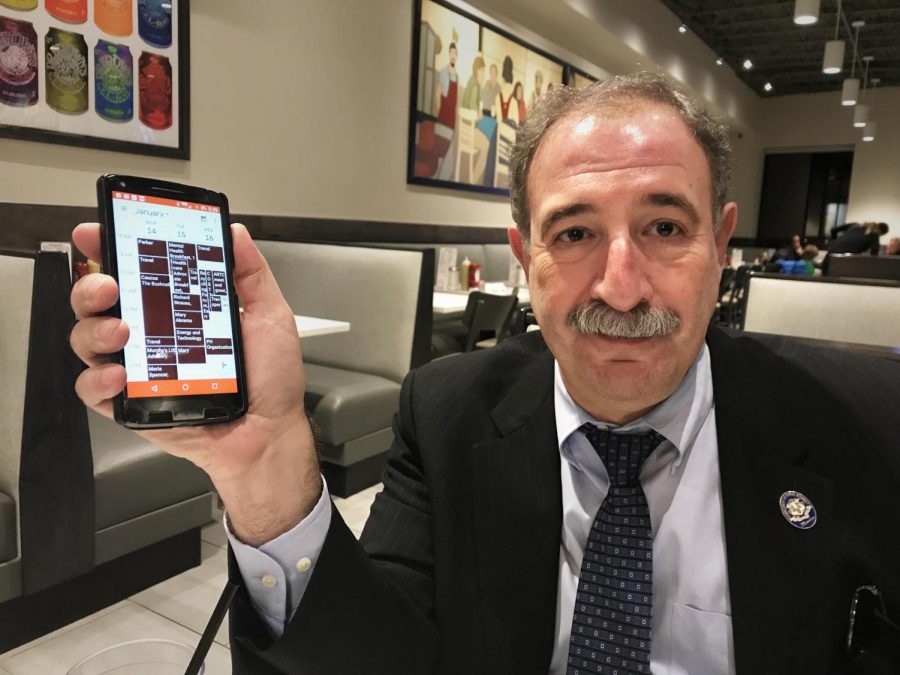 Representative Jonathan Steinberg holds a picture of his daily schedule. Since beginning his fifth term on Jan. 10, he has been active on several committees in the Connecticut General Assembly.

“I’m going to have to pretty quickly prioritize and figure out what the things are that I’m going to want to chase across the finish line,” Steinberg said. “The committees on which I serve reflect my priorities.”

As the chair of the Energy & Technology committee, Steinberg will focus on shifting the state’s economy away from fossil fuels and towards renewable energy sources. Policies he supports include a carbon tax where users, including businesses, are charged a fee based on the amount of carbon-based fuels used.

“That money then would ideally go back to consumers, but would also be devoted to low-income people who need assistance in converting to more efficient [sources],” Steinberg said. “It would basically level the playing field somewhat.”

According to Steinberg, conversion to renewable energy is “a very complex, obscure area of science, and not everyone in the legislature is excited about doing that.”

Steinberg also chairs the Public Health Committee and serves on the Transportation Committee. He supports adding tolls to generate revenue for investing in the state’s infrastructure.

“We are really the golden goose to Connecticut’s economy,” he said, “and our transportation infrastructure crisis, the deteriorating bridges and railroads and all that, must be addressed.”

Steinberg recently served as the chair of the Pension Sustainability Commission, which expired on Jan. 10. The commission aimed to reduce Connecticut’s unfunded pension liabilities, which are the largest out of any state in the country and threaten the government’s ability to adequately pay public school teachers and other state employees.

Although the commission did not find a solution in time, Steinberg said improving the pension issue will remain a focus for the next two years and beyond.

“[Pension liabilities are] sucking up [a] bigger and bigger percent of the budget to the point where these fixed costs are more than half the budget,” Steinberg said. Pensions matter to me because we can’t fix the budget until we fix the pensions.”

Democrats currently hold a supermajority in Connecticut’s legislature, meaning they occupy the governor’s office and a 2/3 majority in both the state senate and house of representatives.

“When we have our progressive issues like the environment, like gun control, like women’s rights, Jonathan hopes to be at the forefront of that,” Lisa Newman, Steinberg’s campaign manager, said. “He’s got the supermajority, which is a great benefit to those of us who have the same progressive mindset.”

Although he describes his views as progressive, Steinberg leads the House Moderates Caucus. Newman said he is a known bipartisan legislator.

“He’s built the relationships up there that are needed to truly get amazing work done,” Newman said. “He’s well-respected by members of both parties, so it’s kind of this cool position he’s in in the coming term.”

“Any Republican should be able to stand behind a Democratic candidate as long as they’re able to put aside party lines to do what’s best for the state,” she said.

With the new Democratic governor, Ned Lamont, in office, Steinberg said he looks forward to making progress with pensions and other major economic issues.

“We’re very hopeful that we have a new governor who has demonstrated his willingness to try new things, to listen to everybody and bring a new sense of hope to the state,” Steinberg said. “I don’t think he has any illusions about the magnitude of the challenges facing him, but I hope we all pull together and we try to be as bipartisan as we can.”